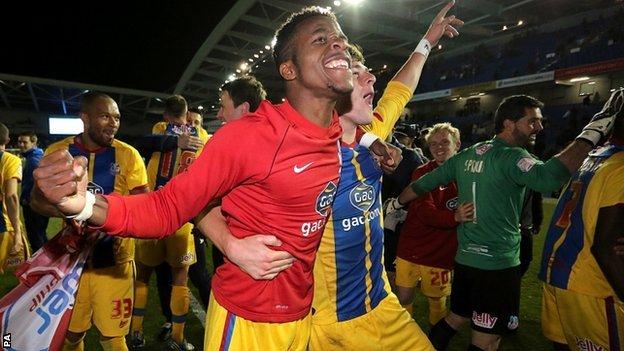 Ashley Barnes had Brighton's best two chances moments after coming on, having one effort saved onto the bar and another cleared off the line.

Form book turned on its head

And he sealed it with a late strike into the roof of the net.

The final against Watford is at Wembley on Monday, 27 May.

England international Zaha, 20, was Sir Alex Ferguson's final signing as Manchester United boss in January but was allowed to end the season on loan at Palace, a decision which could prove the difference between another season in the second tier and a return to the Premier League after eight years away.

The teams drew the first leg 0-0 at Selhurst Park, making the second leg a winner-takes-all showdown at the Amex Stadium.

Brighton came into the game with all the form - they were unbeaten in 10, while Palace's late collapse, which saw them go nine games without a win until the final day, almost saw them miss out on the play-offs.

In fact the Seagulls had won the corresponding league fixture 3-0 in March. The omens looked even more against the Eagles when 30-goal top scorer Glenn Murray suffered a serious knee injury in the first game and was ruled out of the second leg.

His replacement, Aaron Wilbraham, had only scored one goal in 25 league games this season but had the first chance, poking the ball wide from six yards out.

The first half was a cagey affair with defences on top but after the break the game started to open up.

Zaha was lively throughout on the left wing and caused right-back Inigo Calderon all kinds of problems, and he set up the first major chance of the game, his brilliant through-ball putting Jonathan Williams in on goal but the young Wales international fired just wide.

Seagulls manager Gus Poyet, trying to help his side return to the top flight after a 30-year absence, made a substitution after 64 minutes, bringing Barnes on for Andrea Orlandi.

And it almost paid immediate dividends. The forward's first touch was on target with Julian Speroni deflecting the ball onto the crossbar and from the resulting corner his header was cleared off the line by Dean Moxey.

With that, Brighton's chance to win the game had gone as five minutes later, substitute Bolasie's brilliant left-wing cross was headed home by Zaha, who had snuck in behind Wayne Bridge to convert.

And as the home side pushed for a leveller, Zaha sent the Eagles to Wembley as he received another Bolasie pass, before turning Gordon Greer to fire home from 12 yards out.