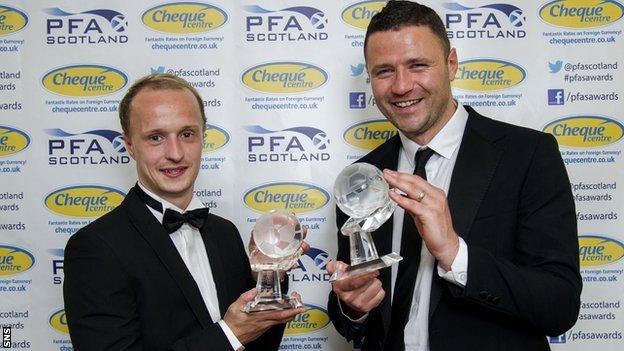 Motherwell striker Michael Higdon has been named PFA Scotland Player of the Year.

The 29-year-old Englishman scored 27 goals as the Lanarkshire side secured a Europa League qualifying spot.

Hibernian's Leigh Griffiths, Andrew Shinnie of Inverness and Aberdeen forward Niall McGinn were also in contention for the award.

Griffiths was named Young Player of the Year, the on-loan Wolves striker having also netted 27 times this season.

Higdon began his career at Crewe before moving north to sign for Falkirk in 2007.

After two years with the Bairns, the Liverpool-born player joined St Mirren, leaving Paisley for Motherwell in 2011.

Griffiths, a Hibs supporter, maintained the award capped off a "dream season", with the further chance of claiming Scottish Cup glory when his side face Celtic in the Hampden final.

"I was very nervous listening to the nominations and when my name got called out my stomach kind of fell out of me but I am delighted to get the award," he said.

"I was was handed the number nine shirt, something I had been dreaming about since I was a little boy and I have scored 27 goals and now I want to get 30 and try to win the Scottish Cup."

Queen of the South's Allan Johnston was named manager of the year. Player-boss Johnston led the Dumfries side to the Division Two title, the first team in Britain to secure a divisional crown this season.