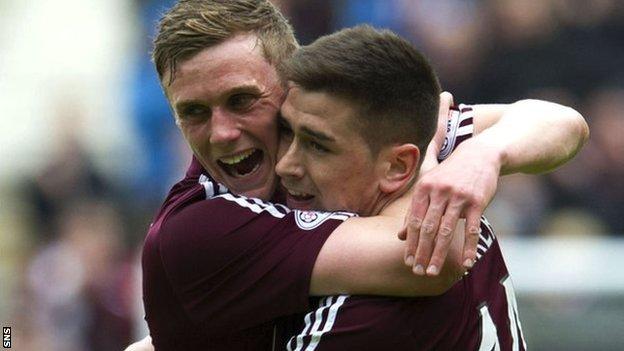 Jamie Hamill admits that, at 26, there are times when he feels like an old man in the Hearts dressing-room.

The full-back returned to action in March after long-term injury and scored his first goal of the season in Saturday's 3-0 win over St Mirren.

"When you come back after a year, all the young boys are flying," he said.

"I see it every day in training, they're coming on well. It is just the way it is in Scotland at the minute, you have got to rely on young players."

So much so that manager Gary Locke had 11 players under the age of 21 in his 18-strong match-day squad against the Buddies.

Hamill pointed out that there are "a few wise heads in between them to guide them along the way".

However, Hearts' financial problems mean that cost-cutting will continue and they have already announced that experienced utility man Darren Barr will not be offered a new contract at the end of the season.

Lithuania captain Marius Zaliukas is widely tipped to be departing in the summer, while there is also a question mark about the future of fellow defenders Andy Webster and Danny Grainger.

Winger Arvydas Novikovas is another whose contract is about to run out without any sign of a new deal being agreed.

Even the cloak of youth has proved no protection from the axe, with German-born midfielder Denis Prychynenko joining striker Gordon Smith in being told that he has no future at Tynecastle, while right-back Fraser Mullen is another whose future in Maroon is uncertain.

Just as well then that a few other young players are already showing themselves capable of holding their own in the Scottish Premier League.

Joining Hamill on the scoresheet against St Mirren were 19-year-olds Jamie Walker and Kevin McHattie.

Locke waxed lyrical about the collective team performance but agreed that the teenage duo had shone against more experienced opponents.

"First half, I thought Jamie did really well," he said of winger Walker, who opened the scoring with a phenomenal run and long-range strike.

"He's been threatening to score a goal like that for a couple of weeks and I was delighted to see that hitting the back of the net."

Defender McHattie fired his first senior goal with a long-range free-kick and then won the penalty from which Hamill added the third goal.

"He's been brilliant, Kevin," said Locke. "He's had a sticky patch, which young boys are going to do, and we took him out the team.

"But, since he's been back in, he's been fantastic and, the way he's performing, you forget he's so young."

Locke shrugged off questions about the spectre of administration that hangs over Hearts should their financial problems worsen, saying he could only concentrate on a future of the field of play he believes is bright.

"I've said it for a number of months now - there's a lot of positive things at the club," he said after cut-price admission resulted in a near full house against the Buddies.

"You see the crowd that backed the team, you see the young lads - there were 11 under-21s that were stripped - and they showed what they're capable of.

"It's just that, when they're young, you do get a bit of inconsistency. But, with that kind of performance, next season we will be at the right end of the table."