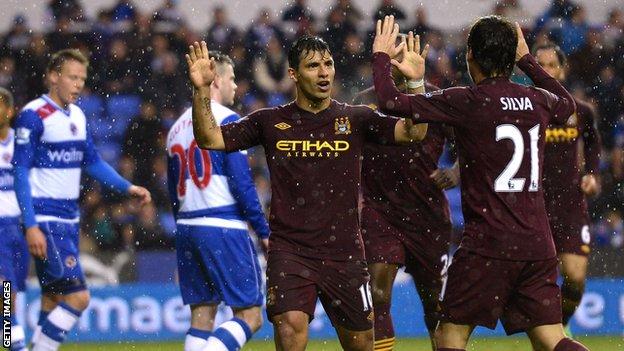 Manchester City started the post-Roberto Mancini era with a dominant win at Reading to secure second place in the Premier League.

Brian Kidd was tasked with lifting City following Mancini's departure and he oversaw a fine display by the visitors.

Sergio Aguero opened the scoring in the first half, despatching a low effort into the corner.

The margin of victory could have been greater but for a number of fine saves from Reading goalkeeper Alex McCarthy.

The hosts had a couple of chances themselves, with Adrian Mariappa's header cleared off the line by Carlos Tevez, while Joe Hart saved well from Jem Karacan, but ultimately they could have few complaints with the scoreline.

A pleasing performance and victory was much needed for City after a testing couple of days.

While it was a weekend of celebration for Manchester United it was undoubtedly one to forget for City.

Ben Watson's late goal at Wembley on Saturday secured a shock FA Cup win for Wigan to deny City their final chance of silverware this season.

Mancini subsequently paid the price for a barren campaign as he was dismissed late on Monday - exactly a year after he had guided them to the Premier League title.

City's travelling support showed their appreciation to Mancini, with banners held aloft ahead of kick-off as they chanted his name.

The City players were evidently determined to put behind them recent disappointments as they started with aplomb at the Madejski Stadium.

McCarthy parried away a low drive from Aguero after a matter of minutes before he kept out a close-range James Milner effort with his feet soon after.

The visitors' early momentum was disrupted in the 15th minute when defender Kolo Toure limped off with an apparent knee injury, replaced by Maicon.

It took City a little while to readjust and consequently Reading enjoyed a decent spell of possession that yielded their first effort on goal. Hal Robson-Kanu scampered goalwards before hitting a low effort from 25 yards that had Hart scrambling at his left-hand post.

City set about pressing the Reading defence, with Yaya Toure seeing a shot blocked before a goalbound effort from Aguero was deflected over his own goal by Sean Morrison.

Aguero was not to be denied five minutes before the break as the Argentine finished off a delightful City move.

Milner and Silva exchanged passes on the right of the area before the latter picked out Aguero unmarked in the middle and the striker steered a first-time effort into the bottom corner.

The lead was no less than City deserved but they had Hart to thank for preserving their advantage five minutes into the second half. Pavel Pogrebnyak got between City's defenders to power a header goalwards and Hart did well to parry the ball to safety.

City endured a nervy few minutes as Reading enjoyed arguably their best spell of the game, with Mariappa's header kept out by Tevez, before Hart dived at full stretch to prevent Karacan from snatching an equaliser.

But victory was made certain in the 88th minute when Silva ran unchallenged towards the edge of the area, feigned to shoot and slid a clever pass to Dzeko, who kept his composure before firing beyond McCarthy from six yards.

"Great credit to the Manchester City players. They were certainly up for it and put a performance in. I think certainly in the second half we gave them something to think about. All in all there was something for both teams to be happy about.

"There were lots of positives for us - the players' application and attitude has been first class. We are seeing a progression from the first game when we took over and we could have scored goals today against a team who were hurting.