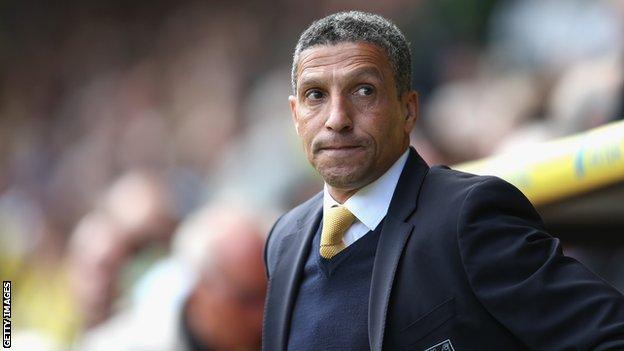 Norwich boss Chris Hughton believes the prospect of facing Manchester City on the final day of the season means they need to beat West Brom next Sunday.

The Canaries have two games to secure Premier League survival after

"It's understandable that the last game away from home at Man City is going to be tough.

"We need to capitalise on this next home game," manager Hughton told BBC Radio Norfolk.

"The players are going to have to show plenty of character this week and we have to make sure we get a good result against West Brom next Sunday."

Only two wins from their 19 games have left Norwich just three points above the relegation zone and should Wigan beat Swansea on Tuesday night, the Canaries will only be above the bottom three on goal difference.

The loss to Villa was their 10th in the league since 22 December and the third in four games.

"I think there was momentum for large parts of the Villa game, certainly in the first half," said Hughton.

"We're guilty of conceding goals. It's not as if we were up against a Villa side that have had lots of opportunities to score goals.

"We need to take the good things out of it but it's a real battle we're in at the moment."

Norwich could be boosted by the return of England keeper John Ruddy against West Brom.

"We decided we'd get through Saturday's game and then make a decision," said the Canaries boss.

"He's now been back for a period of time but it's very difficult. When you're a goalkeeper, there are fine margins of sharpness.

"That's why we haven't played him, but we'll have a decision to make now."