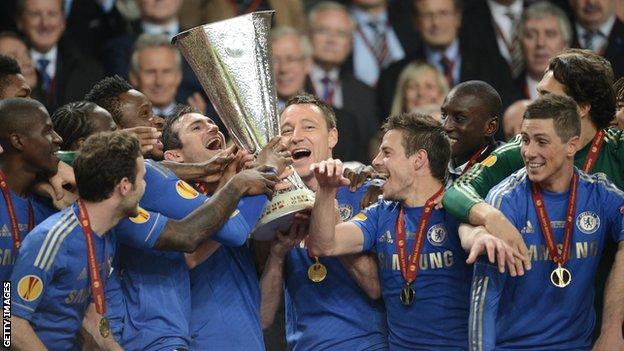 Benitez has proved an unpopular appointment with Chelsea's supporters but they were celebrating wildly in the Amsterdam Arena as they added this trophy to the Champions League won last season.

Fernando Torres scored against the run of play to put Chelsea ahead on the hour but Oscar Cardozo's penalty deservedly drew Benfica level.

Chelsea's triumph means Rafael Benitez becomes only the fourth manager to win the Uefa Cup/Europa League more than once. Others to have achieved that feat are:

It was a night when Chelsea rode their luck for periods against their Portuguese opponents but the sheer grit and resilience shown in grinding out this win in their 68th game of the season is a tribute to their reserves of character.

As for Benitez, he will leave Stamford Bridge following Sunday's final Premier League game against Everton a satisfied - and probably in-demand - manager after guiding the west Londoners into next season's Champions League and claiming a major trophy after succeeding Roberto Di Matteo in November.

Benfica, with their greatest ever player Eusebio watching from the stands, were attempting to lift their European curse and end a 51-year barren sequence but have now lost seven successive European finals, many of their players slumping to the turf in tears at the final whistle.

Chelsea, with Eden Hazard already out with a hamstring injury, also had to do without captain John Terry for a second successive European final after he failed to recover from the ankle problem he sustained at Aston Villa.

"Rafael Benitez managed the squad and the players look like they're together. That stems from the manager and he's galvanised that squad. There's a will about the team. He deserves credit and it's a shame that some people want to tear that page out of the history books because of something he said a long time ago."

The inspiration of Hazard was sorely missed in a lifeless first half from Chelsea, when they were only spared by Benfica's tendency to over-elaborate and their dreadful finishing.

Nicolas Gaitan, in particular, was a culprit when he twice shot wildly off target after Benfica's precise approach play had opened up Chelsea at the back.

Torres took a knock early on and his struggles were made even more acute by a lack of support in midfield, where former Chelsea midfield man Nemanja Matic, who went to Benfica as part of the David Luiz deal, was impressive.

For all Benfica's possession and superiority, it was their goalkeeper Artur who had to make the half's outstanding save. The keeper, prone to occasional moments of eccentricity, did brilliantly to change direction and palm Lampard's swerving shot to safety.

The pattern continued in the second half and the dangerous Cardozo thought he had made Benfica's deserved breakthrough after 50 minutes, but his header from Gaitan's cross was ruled out for offside.

Chelsea took the lead against the run of play just before the hour, but it was a moment of vintage Torres that provided it. He showed pace and body strength to escape the attentions of Ezequiel Garay and Luisao before rounding Artur to score from the tightest of angles.

It required superb athleticism from Cech to prevent Cardozo putting Benfica in front with nine minutes left, the keeper at full stretch to turn his dipping 20-yard shot over the bar.

Lampard came even closer with only three minutes left when his 20-yard drive beat Artur but bounced back out to safety off the bar.

Chelsea had one last chance deep into stoppage time and Ivanovic produced a towering header to win the Europa League.