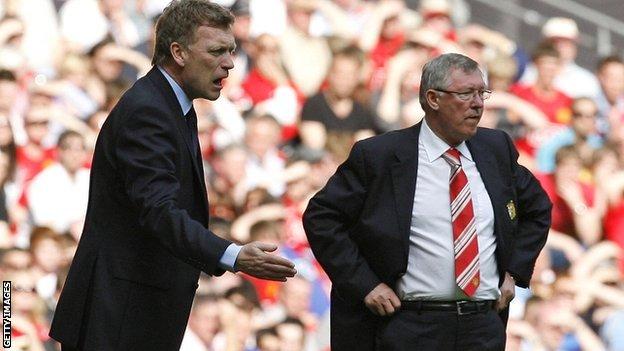 Moyes, who leaves Everton after 11 years in charge at Goodison Park, was Ferguson's recommendation to succeed him as manager at Old Trafford.

The 50-year-old was out of contract at Everton at the end of the season.

"We unanimously agreed on David Moyes," said Ferguson, who announced his retirement on Wednesday after 26 years as United boss.

"David is a man of great integrity with a strong work ethic. I've admired his work for a long time and approached him as far back as 1998 to discuss the position of assistant manager here.

"There is no question he has all the qualities we expect of a manager at this club."

Moyes, who was recommended to the United board by Ferguson and will be introduced as Red Devils boss in "due course", said it was "a great honour" to be appointed as the new manager of the Premier League champions.

"I am delighted that Sir Alex saw fit to recommend me for the job. I have great respect for everything he has done and for the football club," added the Scot.

"I know how hard it will be to follow the best manager ever, but the opportunity to manage Manchester United isn't something that comes around very often and I'm really looking forward to taking up the post next season."

Moyes, described as having "all the skills needed to build on United's phenomenal legacy" by incoming chief executive Ed Woodward, also paid tribute to current club Everton and vowed to remain fully committed until the end of the season.

"I have had a terrific job at Everton, with a tremendous chairman and board of directors, and a great set of players," he said. "Between now and the end of the season, I will do everything in my power to make sure we finish as high as possible in the table.

"Everton's fantastic fans have played a big part in making my years at Goodison so enjoyable and I thank them wholeheartedly for the support they have given me and the players. Everton will be close to me for the rest of my life."

Manchester United defender Rio Ferdinand welcomed Moyes to Old Trafford, saying on MUTV: "I think there are a lot of similarities with the manager that we've got at the moment.

"I'm sure he is the right man to take us forward."

Everton said in a statement: "The chairman, on behalf of the club, would like to place on record his thanks to David for the massive contribution he has made to Everton since his arrival in March 2002. He has been an outstanding manager."

Moyes was installed as favourite to leave Everton for United following a rush of bets over the weekend, even before speculation mounted about Ferguson retiring.

Ferguson, who stays at Old Trafford as a director and ambassador, has had a close relationship with his successor throughout his managerial career and, as he confirmed on Thursday, considered appointing him as his assistant when Moyes was in charge at Preston North End.

Moyes had insisted he would not make a decision on his Everton future until the end of the season, but has now accepted the challenge of succeeding the man many have seen as his mentor.

He has won widespread acclaim for consistently guiding Everton into the upper reaches of the Premier League on a limited budget, including reaching the qualifying stages of the Champions League in 2005, when they lost to eventual semi-finalists Villarreal.

Moyes has not won a trophy in his time at Goodison Park but United's hierarchy have been impressed by the stability he has brought and his ability to keep Everton punching above their financial weight.

He now has the challenge of continuing Ferguson's successes, which include 13 Premier League titles and two European Cups, as United defend the English title they clinched on 22 April, and is expected to have transfer resources that are vast compared to those he enjoyed at Everton.

One of his first tasks will be to resolve the future of Wayne Rooney. The England striker had told the club he wants to leave, but could still be persuaded to stay should he receive assurances that he is central to Moyes's plans.

Moyes, whose his first official game in charge will be the Community Shield against either Manchester City or Wigan at Wembley on 11 August, will also be charged with plotting United's campaign to win back the Champions League trophy they last won against Chelsea in Moscow in 2008.

Meanwhile, Wigan manager Roberto Martinez and Swansea boss Michael Laudrup have both been strongly linked with a move to Goodison Park to replace Moyes.