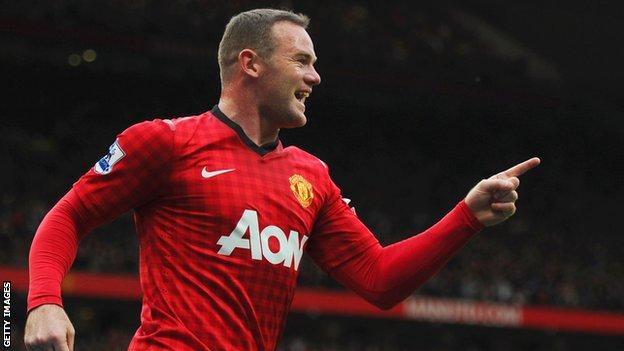 Manchester United insist Wayne Rooney is not for sale after the striker asked to leave Old Trafford for the second time in three years.

The 27-year-old ex-Everton forward told United boss Sir Alex Ferguson two weeks ago he felt the time was right to move after nine years at the club.

A spokesman for United would only say: "Wayne Rooney is not for sale."

The news emerged on the day Ferguson announced he would be retiring as manager at the end of the season.

Rooney is set to be reunited with his former Everton manager David Moyes, who could be announced as Ferguson's successor on Thursday.

Then aged 18, Rooney left Moyes and his hometown club Everton in August 2004 in a deal worth an eventual £27m. He has since scored 197 goals in 402 appearances for United, winning five league titles, two League Cups and a Champions League.

This season the England striker has scored 16 in 37 appearances, 12 of those coming in the league as United won their 20th title.

However there has been speculation in the second half of the season that Rooney may leave, especially after he was dropped to the bench in favour of Danny Welbeck for the Champions League second-round tie against Real Madrid.

Days later Ferguson promised Rooney would stay at the club, saying: "He'll be here next year. You can have my word on that." Ferguson later said Rooney would be given a new deal.

But speculation has persisted and now the forward has asked to leave the club for a second time.

The first occasion came in October 2010 when Rooney pulled out of contract talks, saying he had not received "any of the assurances I was seeking about the future squad".

Ferguson said at the time he was "dumbfounded" by Rooney's desire to leave, but 48 hours later, Rooney signed a new five-year deal. Manchester United went on to win the title that season, and Rooney later said

Moyes and Rooney have had their own differences. In 2008, Moyes accepted substantial libel damages over claims made in Rooney's book about their relationship at Everton.

Since then, however, the pair have been reconciled. In September 2012, Rooney wrote on Twitter: "Everton are playing brilliantly. David Moyes has done some job over the last 10 years."

On this occasion Rooney has not submitted a formal transfer request, but it is understood he asked verbally to leave.

325 comments
Back to top
unknown