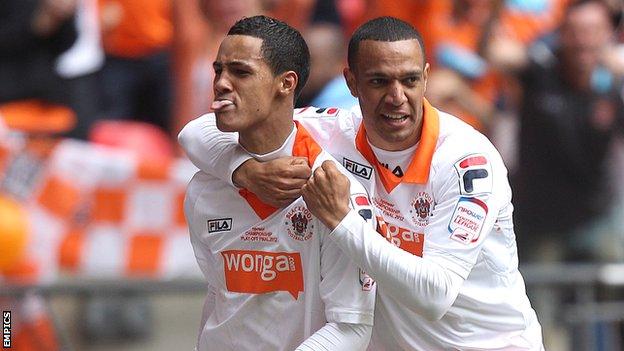 Blackpool have taken up the one-year options on the contracts of wingers Thomas Ince and Matt Phillips.

The highly-rated pair were targets for Premier League clubs in 2012-13.

The Seasiders, who finished 15th in the Championship, have chosen not to offer new terms to 13 players who will be out of contract in the summer.

But of those, long-term injury victims Ian Evatt and Craig Sutherland have been invited to pre-season training and could yet be offered new deals.

Who's staying at Blackpool?

Centre-back Evatt has been at Bloomfield Road since 2006, playing 257 times for the Lancashire club.

Among those released are Portuguese midfielder Tiago Gomes, who played 27 times in all competitions last term, and veteran striker Kevin Phillips, who is and

As well as 21-year-old Ince and 22-year-old Phillips, 10 other players including goalkeeper Matt Gilks, utility man Chris Basham, defender Craig Cathcart and midfielder Angel Martinez will remain at Blackpool for another year.

Ince, who ended as the club's top scorer with 18 goals in 47 appearances, was

His father, Blackpool manager Paul, claimed in April that the England Under-21 international having seen Manchester United splash out around £15m to sign Palace's Wilfried Zaha.

Scotland wide man Phillips began the season by and was the subject of a £5m bid from Southampton in August.

After recovering from a broken toe in mid-season, he went on to make a total of 35 appearances, scoring four goals.