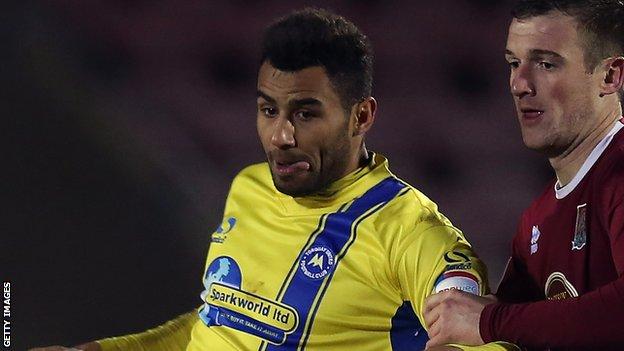 Torquay United's top-scorer Rene Howe is set to leave the club, despite being offered a new deal at Plainmoor.

The 26-year-old, who has scored 28 goals in his has been linked with a move away from the club.

Torquay boss Alan Knill admits there has been interest in the former Peterborough forward.

"He did well enough last season to give himself opportunities to go elsewhere," Knill told BBC South West Sport.

Howe but was booked 25 times and sent off twice in his time at Torquay.

"While I was here we had a really good relationship and got on well," he added.

"Whatever happens we wish him well, we'd like him to be here still, but it's in his hands, not ours."

The news emerged as Knill was formally unveiled to the media as the new Torquay boss, having been given the role earlier this week.

Knill says he will trim the squad down to between 14 and 15 experienced players with youngsters filling the fringe areas of his squad.

"We're going to work within a budget, I don't think we're different to any club," Knill said.

"Most clubs are really tight for money and it's how we spend that money.

"We are going to bring the squad down and make it really competitive."