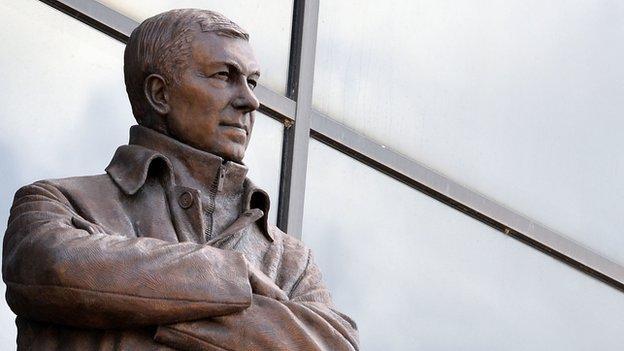 By giving Sir Alex Ferguson the privilege of Manchester United's owners, the Glazer family, are sending a message of continuity. Their hope is that the instability created by the will be reduced.

While some critics might argue it also puts a bit of distance between the unpopular Americans and the David Moyes decision should it go wrong, a six-year contract for the new manager suggests they are prepared to play the long game.

Nevertheless, these are unsettling times for the club.

Also departing this summer is chief executive David Gill, for 13 years the manager's confidant and a link between the club's previous incarnation as a publicly owned company floated on the London Stock Exchange and the debt-funded business model created by the Glazers.

Taking over at the very top of the club is executive vice chairman Ed Woodward, a man who helped frame the controversial Glazer buyout in 2005 and is the Glazers's most trusted lieutenant in England.

He has been the driving force behind the club's extraordinary commercial expansion, which has seen sponsorship income grow by 52% in the last quarter alone, and which is set to lift United's overall revenue to £360m in 2013.

Woodward and the Glazers believe this is just the tip of the iceberg and that there is even more money to be squeezed out of Old Trafford.

But how will Woodward now cope with the daily demands of keeping the football club on track and easing a new manager into the hotseat?

And what happens to the grand commercial strategy if the trophies dry up under Moyes? That six-year contract won't look quite so secure if the fans start to get on the Glazers's backs because of poor results - and more importantly poor performances.

Clearly confidence in the United brand won't vanish overnight. Aon chief executive Robert Brown, the UK head of one of United's biggest sponsors, said no one person - not even Ferguson - was bigger than the firm.

He added that the insurance and consultancy giant had invested in the club for the long term and that its global reach and power would continue for years to come.

Despite that, United's shares dropped slightly on the New York Stock Exchange on Thursday closing down 2% following the Moyes announcement.

Given the scale of the transition going on, you might have expected the market to react with even greater concern - but then stock markets have never been the best barometer for the fortunes of a football club, given most investors don't treat them in the same way as other businesses.

On the playing side, Moyes and Woodward face a more serious concern than their share price, with Wayne Rooney's future back up in the air. Clearly unaware of the big change coming down the track, the England striker told Sir Alex he wanted to leave the club in a meeting two weeks ago.

Following news of Moyes' appointment, there are now more conciliatory noises emerging from the Rooney camp, but with two years left on his contract, this summer would be the moment to cash in and sell.

It is a critical decision which could set the tone for the sort of club United are going to become in the post-Ferguson age. Even if Rooney were to be sold, is there any guarantee the Glazers and Woodward will sanction Moyes to raid his old club and spend big money to strengthen the squad for a push at the European glory which eluded them this season?

Woodward said recently that he believed the club had two top-class teams. It's hard to see him changing his view with a new, potentially much more compliant, manager now at the helm.

All of which brings us back to where we started - and the departure of the man who has come to define Manchester United.

More than that, he has been one of the most influential and enduring figures in British public life.

The succession question is answered but for the new-look United, the battle to stay on top, promises to be as intriguing as the battle to get there.