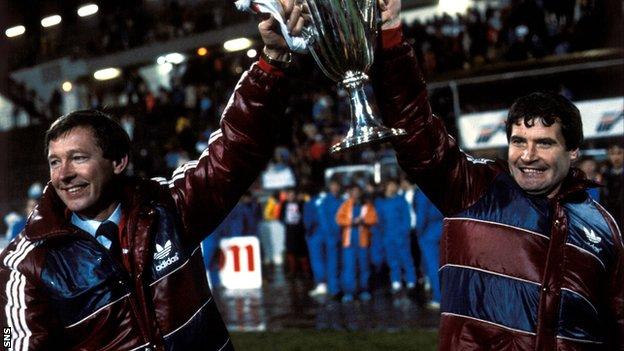 Being floored by one of his own players, angrily criticising his team just minutes after completing a cup double and 'taking out' a defender in retribution are not the typical Sir Alex Ferguson anecdotes.

Ever since Ferguson announced he would be stepping down as manager of Manchester United after 26 years in charge, friends, former team-mates and opponents have spoken at length about the man-management skills, tactical nous and drive the Scot showed in bringing success to Old Trafford and, before that, Aberdeen.

But among the tributes, another side of Ferguson has been touched upon, an edge that has helped to separate him from the rest. Here BBC Sport looks at the "darker side'" of Sir Alex and exactly what he was prepared to do to win.

The man who floored Ferguson

"I lashed out. It was far from a bout-winning punch - more a 'half-dig'. I caught him on the side of the face and he went down like a ton of bricks."

Few people can lay claim to having floored Ferguson and remained friends with the Scot but that is exactly what former Aberdeen striker Frank McDougall did.

In his book 'McDou-GOAL! The Frank McDougall Story', the Glaswegian describes the moment Ferguson's anger got too much for him, causing McDougall to react in a way he feared would jeopardise his own career.

It was in the mid-1980s when Ferguson, then Aberdeen manager, was "raging" at McDougall because, just minutes into a Scottish Cup quarter-final tie with Hearts, the striker had to come off with an injury.

"I had a lot of respect for Fergie but I had learned a long time ago that, in a situation like this, you lash out first and ask questions later," he wrote in his book. "I was at my 'work' and it was the boss in my face. But he had completely lost the plot and I wasn't for waiting to see what he was about to do.

"Of all the stupid things I had done in my life, putting Fergie on his arse had just stormed straight into the charts at number one.

"I gazed at my hand and then down at my boss. It was as though he'd fallen to the floor in slow motion. But he bounced straight back up as though on a trampoline and began screaming at the top of his voice.

"I felt sick to the pit of my stomach. Beads of perspiration dripped from my brow and I was 100% sure that I'd blown it."

McDougall, 55, who scored 104 goals in 207 games playing for Clydebank, St Mirren and Aberdeen, retired from the game in 1987 after a chronic back problem and now runs a sports agency business in Brazil.

He is reluctant to revisit the incident but admits "explosive" moments were common under Ferguson.

He says he was forgiven by his manager quickly, after an apology, and claims Ferguson's anger stemmed from his desire to win, a quality that rubbed off on the majority of those who played under him.

He told BBC Sport: "That was the past, a moment I don't want to focus on. Of course I regret it but you don't think about it in the heat of the moment.

"There were explosive moments with him as manager but that wasn't a problem. Sometimes the manager upset a player because he wanted to win so badly. He had that desire and that rubbed off on us.

Without doubt there was fear - I certainly feared him. That was what he wanted to instil. You either climbed the peaks with him or you disappeared

"Of course he lost his temper and there was a fear about the place but he also looked after his players and he earned massive respect for that."

And he insists there will never be a greater manager than Ferguson.

"He was a genius," he said. "It was a privilege to play for him and I consider him a friend. He is the greatest manager of all time and probably always will be."

The players knew they had not played particularly well but it was still a moment for celebration as a weary Dons squad returned to the changing rooms thinking 'job done'. The triumphant feeling was not to last long.

Ferguson had already strongly criticised his players on television for their performance, before making sure his players heard what he thought of their display in person.

"We were celebrating in the dressing room when the door was flung open and he made it pretty clear what he thought," said former striker Eric Black, then a 20-year old who had scored the winning goal.

"He was going mad and said those levels were unacceptable.

"At the time I thought it was remarkable. I couldn't get my head round what was happening. But what he has gone on to achieve is nothing short of sensational - so he was right, not me."

Ferguson's time at Aberdeen saw him turn them into a major force in a league that Rangers and Celtic then - as subsequently - dominated, before crowning his achievement with that Cup Winners' Cup win over Real.

In all, he won three Scottish titles, four Scottish FA Cups and one League Cup to go with that European trophy during his time at Pittodrie - conspicuous success that saw him land the United job, succeeding Ron Atkinson in 1986.

Black, now 49, who has since managed Motherwell, Coventry, Birmingham, Sunderland and Blackburn, said: "I was with him at Aberdeen between 16 and 23. He has an insatiable appetite to continually climb the next peak. He has a fabulous work-rate and he constantly demands of his players - he constantly demands certain levels of his players and himself.

"Without doubt there was fear. I certainly feared him in some regards. That was what he wanted to instil. You either climbed the peaks with him or you disappeared. It was a constant test and constant demand. Only now looking back, do I see how rigorous it was.

"You knew when you were playing badly. At half-time I would look at my boots and hope I wasn't the one he would be coming for.

"He is prepared to tell you what he wants and if you are not prepared to deliver he will tell you. There are numerous moments I was on the end of it; I think it was his way of forming us.

"He was constantly challenging, even in training. He would not accept second best. You have that fear but you also don't want to let him down. I enjoyed some of the best parts of my career at Aberdeen."

What goes on tour stays on tour

Even earlier in Ferguson's managerial career, his St Mirren side - especially striker Bobby Torrance - were being given some rough treatment during a pre-season friendly in Guyana in 1976 when the former Rangers striker decided "enough was enough".

His complaints to the referee were proving fruitless, so he decided to bring himself on at half-time in pursuit of some retribution.

"In the first contest for a cross," Ferguson recalled in his autobiography 'Managing My Life', "I exacted a bit of revenge on the centre-half, whose squeals caused the referee to point at me ominously.

"The confrontation became fierce until I nailed Torrance's abuser perfectly. As he rolled about like a dying man, the referee sent me off."

The incident stayed private on St Mirren's return, only being made public by Ferguson himself years later, but was not forgotten by his players

Former St Mirren striker Tony Fitzpatrick recalls: "Everyone was getting it in this match in particular. Alex was a striker and, seeing the stick one of his young players was getting, he brought himself on to stick up for his own. That shows the passion of the man and how much he cares for his players.

"If someone cares for you like Alex Ferguson cared for his players at St Mirren, you would go that extra mile for him. It is like that in all walks of life.

"We would not speak about it when we came home, of course we wouldn't. It is not as though he hadn't done what he did for a good reason. He was standing up for one of his own.

The following season, Ferguson, who was in charge at St Mirren from 1974-78, led the club to the First Division title.

And Fitzpatrick, 57, who went on to manage St Mirren himself, believes that three-week Caribbean tour played a pivotal role in their success.

"That tour was a big factor in what we went on to do that season," he said. "We all got to know the manager's personality and we got to see what he thought of his players. It galvanised us and brought us all together.

"The impact he had on St Mirren was incredible. He not only built up the football club, he built the structure around it.

"There was something about the man, something that all great leaders have. It is a quality you can't put your finger on.

"Not only is a great, great manager, he is a great man and that is maybe the part people don't realise. It is an honour to know him."