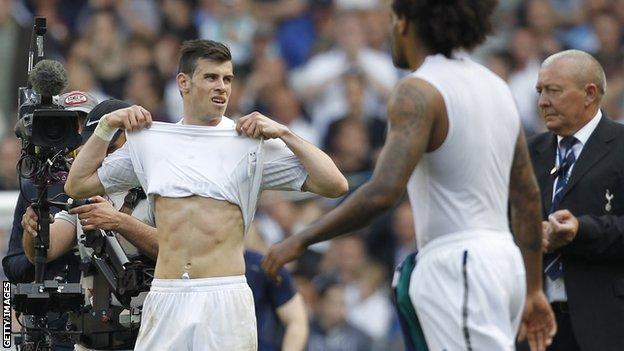 Tottenham fulfilled their part of the bargain with a final-day victory over Sunderland - but their Champions League ambitions were shattered by Arsenal's win at Newcastle United.

Gareth Bale added to his catalogue of spectacular goals with a brilliant late strike but that elation soon turned to deflation as the news filtered through from Tyneside that Spurs had been thwarted by their fiercest rivals in the chase for fourth place.

Tottenham's total of 72 points is their highest in the Premier League but this was of little consolation to manager Andre Villas-Boas and his players - their faces pictures of dejection as they trooped down the tunnel after Arsenal's victory was confirmed.

Bale at least gave Spurs fans another golden memory to remember him by after a stellar season with a trademark long range strike beyond Sunderland's outstanding keeper Simon Mignolet just as stoppage time was about to begin.

Mignolet kept Spurs at bay with a succession of saves while they were angered by referee Andre Marriner's refusal to award penalties for a foul on Bale by Seb Larsson and a second-half handball by Carlos Cuellar.

To add insult to injury Bale was cautioned for diving, his fifth booking of the season, while Spurs have not been awarded a penalty all season.

Sunderland battled hard, despite being reduced to 10 men when David Vaughan was sent off for a second yellow card in the second half, but Spurs thoroughly deserved their win on sheer weight of pressure and chances.

Sadly, however, they have come up just short on the final day of the season and their pain will only be made more acute by the fact that it is Arsenal who have claimed the place in Europe's elite they so desperately wanted.

Spurs finish in fifth, a place lower than last season when Chelsea's Champions League win took the prize away from them, and must contest the Europa League once more.

Tottenham's win against Sunderland has seen them beat their previous record Premier League points haul of 70 - set in 2009-10 - by two.

They responded to the atmosphere of expectation inside White Hart Lane by dominating possession - but Mignolet was well protected by a defence missing Danny Rose, who was not eligible to play against his parent club, and Phil Bardsley.

Referee Marriner's decision to book Bale for diving in the 21st minute almost sent the disbelieving Villas-Boas down the tunnel in pursuit of fourth official Phil Dowd. Bale looked to be very clearly bundled to the floor by Larsson as they chased the ball into the area but the official, some distance away, enraged Spurs by not only ignoring their penalty claims but punishing the Wales international.

The sense of injustice swirling around White Hart Lane could have increased as Danny Graham found the unmarked Connor Wickham at the near post but keeper Hugo Lloris reacted well to save.

Mignolet was called into action as the half drew to a close but saves from Tom Huddlestone and Bale kept Sunderland on level terms.

For all Spurs' pressure, it was Lloris who was being forced into the better saves at this stage and he was in action again to save from Graham after Huddlestone carelessly gave the ball away in midfield.

Frustration was mounting by the minute, no more so than just after the hour when Jack Colback cleared off the line from Scott Parker then deflected Aaron Lennon's follow up shot on to the post.

Mignolet made a meal of saving Michael Dawson's header as Spurs laid siege to Sunderland's penalty box. The keeper was emerging as the central figure in the second half and he denied Spurs again with a vital block from Bale.

Sunderland were reduced to ten men when Vaughan, who had earlier been booked for fouling Parker, needlessly brought down Lennon.

In a predictable late assault, Bale's rising strike offered brief hope to Spurs and their fans - but it is Arsenal who reach the Champions League.