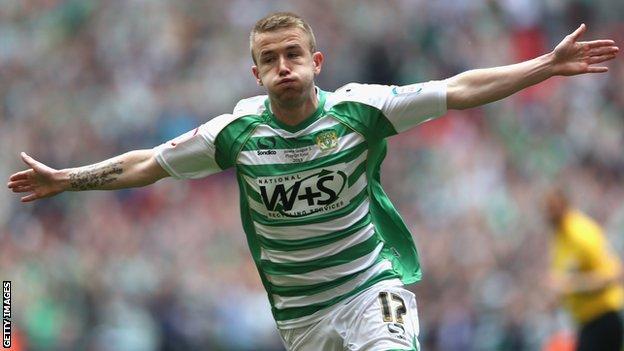 Yeovil secured a first ever season in the Championship as they beat Brentford in a tense League One play-off final.

Paddy Madden gave the Glovers an early lead when he fired past keeper Simon Moore from outside the box.

Dan Burn's header from Jamie McAllister's corner made it 2-0 before half-time but Harlee Dean nodded home to reduce the deficit after the break.

The Glovers withstood heavy pressure to seal promotion in their 10th year as a Football League club.

"It is incredible that a team of Yeovil's size can get to the Championship. They stood firm and it is a magnificent achievement."

In his second spell as manager, Gary Johnson has now won promotion with the Somerset side for the third time, having overseen their promotion to the Football League in 2003.

Even before their Wembley triumph, this season had already brought them their highest ever league position, as they finished the regular League One term one place below Brentford in fourth.

The Bees, who succumbed to an injury-time goal against Doncaster on the last day to miss out on automatic promotion, will again feel extremely unfortunate after wasting a number of chances to get back on level terms with the Glovers.

It is becoming a familiar feeling too - this was their seventh failure out of seven in the play-offs.

Yeovil's arrival in the Championship - via only their second play-off campaign - is the more remarkable for having been achieved on one of the division's lowest playing budgets and with an average attendance of 4,071 - more than 2,000 lower than their Wembley opponents' home gate.

The Glovers were well and noisily supported at Wembley, however, and their fans soon had something to celebrate as Sam Foley's shot from outside the area was blocked by Logan and the ball fell to top scorer and former Carlisle striker Madden, who lifted it over Moore for his 23rd Yeovil goal this season.

Brentford then began to dominate possession but failed to create clear opportunities, although Harry Forrester should have done better after breaking into the area. As it was, his looping cross-shot was easily gathered by the Glovers keeper and man of the match Marek Stech.

And the Bees were soon made to pay for their lack of clear chances when the resulting corner saw Yeovil double their lead, Burn heading McAllister's deep corner towards goal and Hayter swiping at the ball without making contact to fool keeper Moore and his defender Craig.

Brentford came close to reducing the deficit deep into first-half injury time when Marcello Trotta's header was saved by Stech and, having switched formation from 4-3-3 to 4-4-2, the west Londoners soon went close again when Dean headed Forrester's corner wide.

But the Bees centre-back found the net soon after as he found himself unmarked in the box and headed in from Adam Forshaw's corner to make it 2-1.

With the tension mounting there was a moment of light relief as Bees boss Uwe Rosler was accidentally struck in the face with the ball by his own right-back Shaleum Logan.

Brentford will extend their 20-year absence from the second tier, having failed to return since a one-season stint in 1992-93

Brentford continued to dominate as Clayton Donaldson headed Forrester's cross towards goal and, when that effort was saved by Stech, substitute Bradley Wright-Phillips was unable turn in the rebound.

Fellow replacement Sam Saunders made an instant impact by setting up Forshaw, whose low shot was blocked by the legs of Stech.

Yeovil had what appeared to be a reasonable claim for a penalty turned down when Jake Bidwell caught Kevin Dawson in the box and the Glovers midfielder was subsequently booked for venting his frustration at the referee.

Soon after, Foley fired wide from long range before Wright-Phillips went close at the other end with a shot on the turn.

Logan then flashed a shot wide and Dean headed off target as Yeovil survived a Brentford onslaught to record the greatest success in their side's history.