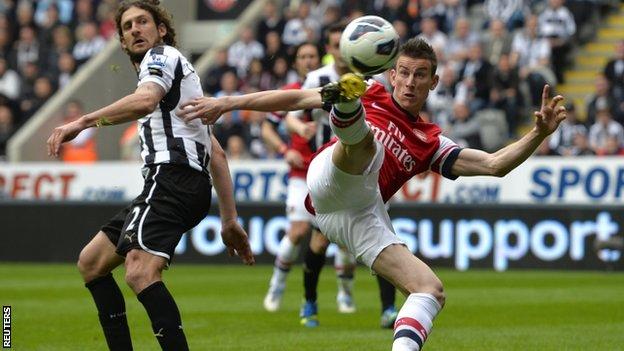 Arsenal sealed their 16th consecutive Champions League qualification as a rare goal from Laurent Koscielny earned them a lucrative victory over Newcastle.

The French defender latched on to Lukas Podolski's header following Theo Walcott's free-kick to score his most important Arsenal goal as they pipped Tottenham to fourth spot in the Premier League and the final place in Europe's elite competition.

The Gunners finished a point ahead of Andre Villas-Boas's Spurs, who scored late on to beat Sunderland but needed to better their rivals' result.

It could have been more comfortable for Arsenal as Walcott hit the post in stoppage time against a Newcastle side desperate to improve after recent home defeats to Sunderland and Liverpool.

Arsenal boss Arsene Wenger and his team saluted their joyous supporters, who sung "are you watching, Tottenham?" with added fervour.

Reaching the Champions League ahead of Spurs completed a superb turnaround after they trailed by seven points at the beginning of March. Arsenal have now finished above Spurs 18 seasons in a row.

And the late-season form of Wenger's side, who have won eight of their last 10 Premier League games, will also go a long way to appeasing fans who had doubts about the Frenchman earlier in the season.

Arsenal have not won a trophy since the 2005 FA Cup but reaching the top four again at least means the Gunners can attract new talent in the summer with funds due to be released for players.

The win was as hard-fought as the scoreline suggested, with Newcastle probing in the first half and the visitors enduring a nervous final few minutes as news filtered through of Gareth Bale's late goal at White Hart Lane.

Despite another home defeat, the Magpies finished 16th having secured their Premier League safety against QPR last weekend, and their season finished on a relative high note as the supporters saluted 38-year-old goalkeeper Steve Harper, who played his last game for the club after a 20-year career on Tyneside.

After finishing fifth last time round, this has been a frustrating season for Alan Pardew's side but he will aim to address his squad this summer.

He would been heartened by his side's first-half display, in which Papiss Cisse was a whisker away from giving the hosts an early lead but fired over following Mapou Yanga-Mbiwa's cutback.

Santi Cazorla and Walcott were both off target as the visitors struggled to impose themselves and they were not helped when Mikel Arteta, who passed a fitness test on an injured calf before the game, was substituted before the half-hour.

His replacement, Alex Oxlade-Chamberlain, slotted into the deep midfield role despite usually appearing on the wing, but struggled to contain Hatem Ben Arfa.

Pardew's side were in the ascendancy as the home supporters saluted Harper in the 37th minute to correspond with his squad number, the keeper unable to control his emotions amid the deafening cheers.

Harper's day almost took a turn for the worse shortly after the break, however, when his poor kick fell to Walcott, but he made amends with a fine stop.

He could do little about Koscielny's goal, however, when Podolski got on the end of Walcott's free-kick from the right and the defender swivelled to fire home from close range.

The goal sent Arsenal fans - aware that Spurs were being held - into raptures but only a good block from Per Mertesacker prevented the energetic Yoan Gouffran scoring an equaliser.

The remainder of the second half was played out in muted fashion, although it livened up when news of Gareth Bale's goal filtered through.

The Arsenal bench crept onto the pitch in anticipation of Walcott's late effort going in, but they only had to wait for four minutes of stoppage time to end before they could finally celebrate.

Newcastle manager Alan Pardew: "We were under-strength to enter two competitions as we did. The Europa League on the Thursday night takes away a lot of legs for the Sunday.

"We've got very good young players. I think 80% of that team next year will do very well for us but they do need a lift, a bit of experience, a bit of quality.

"We have got some great players here. It's key for us next year to keep everybody fit."