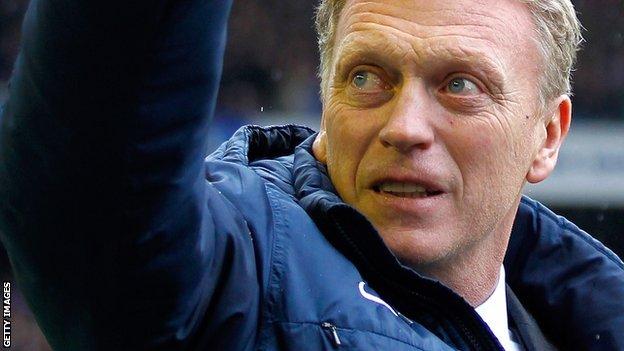 As he walked off the Goodison Park turf for the final time as Everton manager, David Moyes' eyes were filled with tears.

This study in Scottish steel could no longer contain the emotion. Just three days earlier, he had sat down with Everton chairman Bill Kenwright and explained he had decided to join Manchester United as Sir Alex Ferguson's successor.

I have mellowed over the years, I think. I am still intense, but I would like to think now I know when to use it

And at Goodison on Sunday there was no sense of bitterness or disappointment, only good will, thanks and ultimately tears for those to whom this club means everything.

"It has been emotional," was how Moyes described it. "From the moment I arrived today, it has been like that."

The stewards had got the ball rolling, lining up and clapping him as he arrived. Others shook his hand, wished him luck and thanked him - there were no dissenting voices, not one. The scenes at the final whistle were more akin to a club that had won a trophy than one about to lose a valued manager.

Having seen off West Ham with a performance that bore all the hallmarks of a Moyes side - tenacity, technique and perseverance - he took centre stage for the final time.

The Glaswegian is not comfortable in the limelight, that much was clear before kick-off.

Goodison rose to its feet to welcome a man the stadium announcer emphasised was "still the Everton manager". But for Moyes there were no frills or fuss as he waved briefly to all four stands and then took his place on the touchline - there was a game to play.

With their manager camped on the edge of his technical area, Everton raced out of the traps to snatch the lead after just six minutes and never looked back. Moyes joined in the celebrations, mouthing the words "what a goal, what a goal" as Kevin Mirallas swept in after a flowing team move.

But the job was not finished. During the second half, Moyes was seen flicking the ball up to Steven Pienaar to allow him to take a quick throw-in - this meant just as much as it ever had, more maybe. This was, he said, about the football club, not about him.

Mirallas struck again to guarantee Everton sixth place and the only hint of sentiment on the field came with the last-minute introduction of Tony Hibbert, the only surviving player from Moyes' first game in charge.

Then the West Ham players disappeared, leaving the stage to the men in blue and their manager.

As Moyes walked out through a guard of honour and into the centre circle for the final time, he was visibly moved by the warmth of the Everton supporters. Had he doubted they would respond in this way?

"I suppose after the last few days, I got the sense it might be good," he said.

"If I had been an Everton fan today, I would have clapped the manager. When I arrived we needed to win to avoid going down. Now we are fighting for Europe and today that was a performance of a top club - I don't mean a team in sixth, I mean a really top club."

Clap they did. Kenwright couldn't hold back the tears as Moyes and the team he built began their lap of honour. By the time the Everton manager reached the Gwladys Street end, he was overwhelmed. As his players embraced him, his eyes glistened.

"I was gobsmacked. I feel incredibly humble," he said. "What I saw out there was the Everton fans showing what a big club this was today. It wasn't about David Moyes, it was about Everton Football Club. This is a special football club."

It is certainly a club transformed over the past 11 years.

Only once in the decade before his arrival did Everton finish in the top 10 - under Moyes they have been fourth, fifth twice, sixth once, seventh three times and eighth - this season they will finish sixth, above Liverpool for a second successive season and all on a budget that many would have deemed prohibitive before the former Preston centre-half showed what was possible.

"I have mellowed over the years, I think," he said, when asked how he had changed in his time at Everton.

"I am not sure that is a good thing; maybe it would be better if I was still a baddy. I am still intense, but I would like to think now I know when to use it and know how to use it in the right way."

Those closest to him expect his final week at Everton to be no different to his first. When the players return on Tuesday, Moyes will be first at the club's Finch Farm training ground and the last to leave - in his mind, the job will not be finished until the final whistle against Chelsea next Sunday.

Beyond that, he will look to the future, and to the immense challenge that lies in wait at Old Trafford. But on Sunday he allowed himself, albeit briefly, to reflect on the time that has passed. Everton will not forget.

149 comments
Back to top
unknown