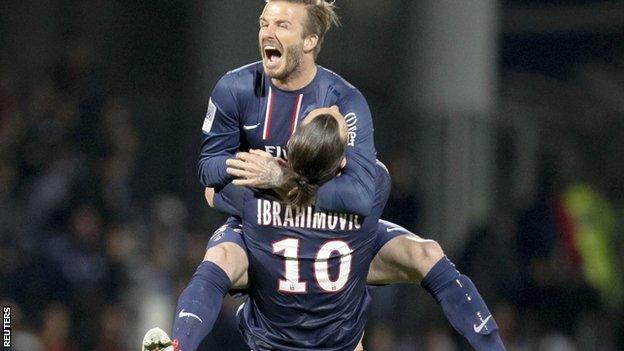 There may be continuing uncertainty over their coach Carlo Ancelotti's future, but what is beyond doubt is that Paris St-Germain are Ligue 1 champions.

They sealed a first French league title in 19 years thanks to a solitary Jeremy Menez goal at Lyon, a fine 53rd-minute finish from Thiago Motta's pass.

David Beckham got in on the act as a late substitute for Menez, and became the first English player to win a championship in four different countries (England, Spain, USA and France).

Despite the absence of the suspended trio of Thiago Silva, Salvatore Sirigu and Marco Verratti, it was fairly comfortable for PSG against the youthful Champions League chasers.

"We deserved it," a delighted Ancelotti told French television on the pitch after the game, as his players celebrated.

Lyon's defeat means Marseille - 2-1 winners over Toulouse on Saturday - qualify directly for the Champions League group stages and that Lille, Nice or St Etienne could yet steal third spot from them.

Real boss Jose Mourinho's continued decision to leave out defender Pepe made the headlines, rather than Gonzalo Higuain's equaliser in the 1-1 draw.

With defender Raphael Varane set to miss the Copa del Rey final through injury, this story promises to run through the week.

Barcelona's 2-1 win at Atletico Madrid on Sunday would have sealed the title, even if Real had won.

Radamel Falcao - reported to be on the verge of a move to Monaco - gave the Rojiblancos the lead early in the second half, but Alexis Sanchez equalised before a bizarre Gabi own goal gave Tito Vilanova's men the points.

At the bottom, the Galician duo of Deportivo La Coruna and Celta Vigo went closer to going straight back down. Depor lost at Valladolid (who are now safe) on Saturday, while a controversial decision to rule out a Quique de Lucas goal for Celta saw them lose 1-0 at Betis. Both remain in the bottom three.

Tough at the top

A Porto win at Pacos de Ferreira next week will seal the title, no matter what Benfica do at home to Moreirense.

The drama overshadowed an even more astonishing story from earlier in the day, as little Pacos sealed third place - and a Champions League qualifying spot.

Paulo Fonseca's team were held to a 1-1 draw at Academica, but Nacional's 3-1 win at fourth-placed Braga gave Pacos an unassailable five-point lead with a game to go.

Around 1,000 ecstatic fans at the town hall greeted the squad on their return. It is fair, though, to assume Pacos' 5,000-capacity Mata Real stadium will struggle to host their home ties.

With Juventus clinching the Serie A title last weekend and Napoli confirming second spot after Wednesday's win at Bologna, it was all eyes on Milan on Sunday night.

Unfortunately for the Rossoneri, they were unable to get the win they needed against Roma to rubber-stamp Champions League qualification.

The goalless draw was a feisty affair, marred by red cards for Sulley Muntari and Francesco Totti - and reports of racist abuse that saw the game stopped.

Milan must win at relegated Siena on the final weekend to ensure third place, with Fiorentina ready to leapfrog them in case of any slip by beating bottom side Pescara.

Palermo's 1-0 loss at Fiorentina on Sunday saw their nine-year spell in Serie A come to an end. Inevitably, it was Luca Toni, whose goals sealed promotion in 2004, who scored the Viola's winner.

With the Bundesliga's top three of Bayern Munich, Borussia Dortmund and Bayer Leverkusen already confirmed, both Champions League finalists were in prolific form.

Bayern beat struggling Augsburg 3-0, after Thomas Mueller opened the scoring in the 69th minute. Dortmund recovered from 3-1 down to draw at Wolfsburg, with Marco Reus scoring twice in the final six minutes.

The race for fourth - and the final Champions League place - has more to run. Schalke missed the chance to seal it, going down to mid-table Stuttgart. Bosnia's Vedad Ibisevic scored both goals in a 2-1 win.

Either Freiburg (a point behind Schalke) or Eintracht Frankfurt (two points back) could steal it on the final day.

Freiburg won 2-1 at relegated Greuther Furth, while Frankfurt drew 1-1 at Werder Bremen - who are now safe, despite squandering the first-half lead given to them by on-loan Chelsea forward Kevin de Bruyne.

The identity of the second automatically relegated team and the relegation/promotion play-off (to be played against third-placed Bundesliga 2 side Kaiserslautern) are still unknown.

Hoffenheim remain favourites to go after a 4-1 defeat at home by Hamburg. They have the tough task of winning at Dortmund next week and hoping the two sides above them lose. Third-bottom Augsburg trail Fortuna Dusseldorf, who lost at home to Nuremburg, on goal difference.

Galatasaray had sealed their 19th Super Lig title last week, but the intercontinental derby with Fenerbahce always matters. Fatih Terim's team took a first-half lead through a Burak Yilmaz penalty, but the Yellow Canaries did need to win to recoup second place - and a Champions League qualifying spot - from Besiktas.

They did so, thanks to a brace by Cameroon striker Pierre Webo. In a fiery end to the game, Galatasaray's Sabri and Fenerbahce's Volkan Demirel were both sent off, with midfielder Mehmet Topal replacing Volkan in goal.

CSKA Moscow moved to the brink of a first title since 2006 on Sunday with an impressive 4-1 win at neighbours Lokomotiv.

Two first-half goals from Vagner Love and one from Ahmed Musa gave Leonid Slutsky's side a 3-0 lead at the break. Coveted Ivory Coast striker Seydou Doumbia scored the fourth.