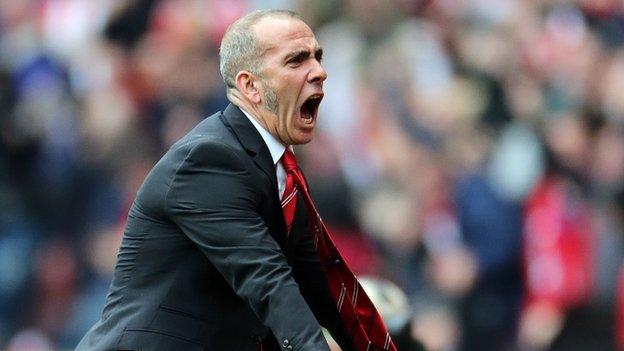 Sunderland manager Paolo Di Canio has vowed to make big changes at the club, regardless of whether his side remain in the Premier League next season.

After their the Black Cats could still go down.

The Italian said: "Let me be sure that we are going to keep the club up, and then I am going to change everything.

Sunderland can secure their Premier League status on Tuesday night without playing if FA Cup winners Wigan lose at Arsenal in their game in hand - a result which would send Roberto Martinez's Latics down to the Championship.

If not, a draw against Spurs next weekend would make sure the Stadium of Light club retain Premier League football, with Wigan playing fellow strugglers Aston Villa.

Since taking over at the end of March, Di Canio has picked up eight points from six games - and he admits it has been a struggle at times.

"When I came, I knew before the quality we had was exciting. I'm talking about Stephane Sessegnon, Adam Johnson, John O'Shea at the back - and many others, young fellas with quality," he said.

"But the environment - I am not accusing anyone, it was dead.

"I have been part of this environment for five weeks and eight points in six games, in this situation, the players have performed a miracle.

"Before I signed a contract with the club, I would have signed for eight points from six games, so the lads have done an amazing job."