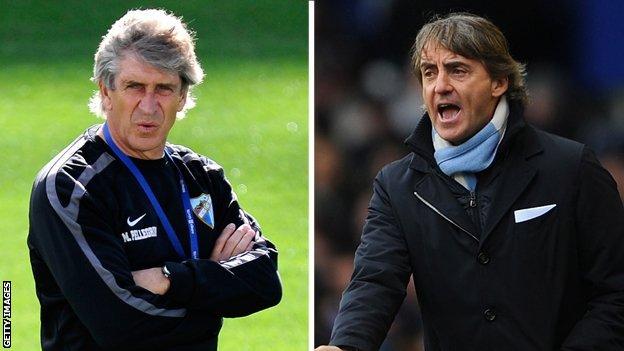 Malaga's Manuel Pellegrini has denied he has agreed a deal to replace Roberto Mancini as Manchester City manager.

After losing Mancini criticised City's owners for not quashing reports that a deal with Pellegrini, 59, was done.

But Chilean Pellegrini told Malaga's website: "I categorically deny that I am the new Manchester City coach."

On Monday morning, Mancini took training ahead of the match against Reading on Tuesday.

He made no comment as he arrived at Loftus Road, where City are based following the FA Cup final.

In his statement Pellegrini said: "I have an agreement with Malaga not to talk to anyone and nothing has been agreed with any other outfit."

He added: "Nothing has been signed and no agreement reached. I've been fortunate enough, and very proud, that every year the big clubs are interested in me.

"I hope the future of this club will become somewhat clearer in the next few days."

Mancini took over from Mark Hughes in December 2009, leading City to the FA Cup in 2011 and the Premier League title a year later.

Mancini said he did not know why the meeting had taken place.

Pellegrini, who has previously had spells in charge of Real Madrid and Villarreal, took charge of Malaga in November 2010.

In his first full season in charge, he guided Malaga to fourth in La Liga and Champions League qualification for the first time.

Malaga reached the last eight of the Champions League, before being knocked out by Dortmund. They are currently sixth in La Liga.

They will not play in European competition next term after being banned by Uefa over unpaid bills.