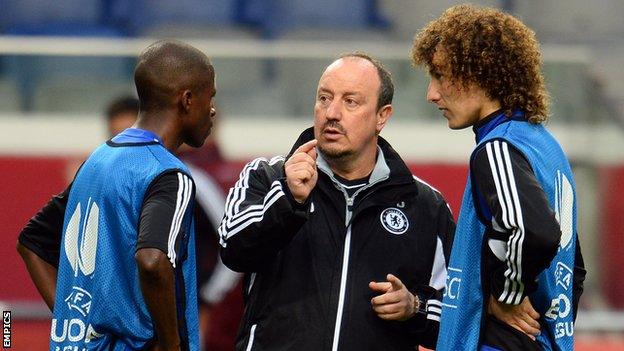 As the strains of Glenn Miller's classic "In The Mood" echoed around the Amsterdam Arena, Rafael Benitez was planning a leaving present for the Chelsea fans who have almost grown to tolerate him.

Benitez was certainly in the mood to add the Europa League to the Champions League he won at Liverpool in 2005 and the Uefa Cup claimed when coach at Valencia 12 months earlier.

If many Chelsea fans refuse to remember Benitez's short interim reign at Stamford Bridge once he has gone, the Spaniard is at least determined to leave a trophy behind with his name alongside it.

Chelsea's supporters may not wish to recall Benitez with any fondness, but you suspect this most divisive of managers may just take added pleasure in giving them no option by delivering success.

Benitez has made much of his reputation on the one-off European set-piece, proving a successful strategist while taking Liverpool to two Champions League finals - and it was clear this stage suits him as he faced the media in Amsterdam.

Having secured owner Roman Abramovich's main priority of a place in next season's Champions League, Benitez can provide an added bonus and add weight to his carefully cultivated CV by beating Benfica on Wednesday.

Much has been made of Benitez's desire to add a trophy to his own list of honours before taking his leave after Sunday's final home game against Everton, in the manner of a personal vanity project - but a coach wanting to add to his reputation by winning honours is hardly a crime.

Benitez was relaxed in familiar surroundings, once more declining to offer any apology when asked about comments relating to Chelsea before his arrival. Smiling he replied: "A manager has to defend his club and I'm defending Chelsea now."

And as Chelsea trained, he was in his element, although there was a certain irony at the ineligible Demba Ba hitting the back of the net from all angles while Fernando Torres looked out of sorts.

Benitez spent a long spell in conversation with Torres during training, no doubt reminding the rather sullen striker he has been Chelsea's specialist since they dropped out of the Champions League and into the Europa League after a dismal defence of their crown.

Rarely has Benitez looked more relaxed, observing from the sidelines before a lengthy and animated discussion with Ramires and David Luiz. And even when Chelsea's players returned to the dressing room he stayed behind to pose for pictures and sign autographs with observers inside this magnificent stadium.

Benfica will present dangerous opponents under coach Jorge Jesus, a man on a personal mission to end the Eagles' run of 51 years without a European trophy, which has included six defeats in major finals.

Jesus wants that curse ended and the quality they have displayed in this tournament marks them out as formidable opposition, but Benitez has a list of victims in European combat that stands the closest scrutiny. AC Milan, Real Madrid, Barcelona and Inter Milan all fell to his Liverpool sides.

For Benitez, there is the possibility of forcing Chelsea's followers into accepting his time at Stamford Bridge was fruitful by presenting tangible evidence, while making himself more attractive to prospective employers. He wishes to stay in the Premier League but he also had to deal with inquiries about possible interest from Napoli when he faced the media.

Benitez's history, his ability to craft victories in one-off European games, has been much of his stock in trade. And, while there was not exactly warmth towards him from Chelsea fans gathering in Amsterdam, there was a quiet, almost whispered, acceptance that he is due some credit should they beat Benfica.

One man less likely to be coming to the end of his Chelsea career is Frank Lampard. The expected arrival of Jose Mourinho has increased the prospect of him staying after he became the club's all-time record goalscorer, taking his tally to 203 with both goals in Saturday's 2-1 win at Aston Villa.

Few would bet against this remarkable player adding goal number 204 in his 607th appearance for Chelsea and he is likely to lead them, as he did in last season's Champions League final win, because John Terry has an ankle injury.

Lampard and goalkeeper Petr Cech were at pains to point out Chelsea were not in pursuit of a consolation prize in the shape of the Europa League. These serious professionals are chasing a serious trophy. As Lampard said: "The more we have been in it the more we have grown to love it."

No-one loves the stern challenges and examinations of European football more than Rafael Benitez. Benfica will provide him with both in the majestic surroundings of the Amsterdam Arena.