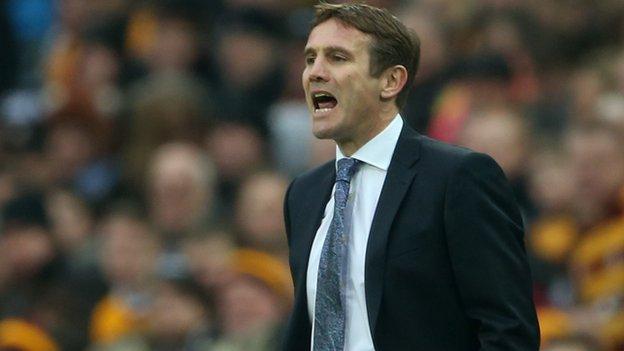 Bradford City boss Phil Parkinson says he wants his side to "finish the job" by earning promotion on Saturday.

The Bantams will travel to Wembley to face Northampton Town in the League Two play-off final.

He told BBC Radio Leeds: "Last year was really tough because there was so much hanging on us staying in the league.

"We set out a plan in the summer to move forward and I'd like to think come Saturday evening that can be completed. We know we've got to finish the job."

This is Bradford City's first play-off final since beating Notts County in the third tier final in 1996. Chris Kamara's side were 2-0 winners on the day thanks to goals from Mark Stallard and Des Hamilton.

Bradford finished seventh in the regular season, their best placing since being relegated six years ago, before progressing to their first play-off final since 1996, courtesy of a 5-4 aggregate win over Burton.

And the trip to Wembley will be their second of the season after 45-year-old Parkinson guided them on a stunning run to the League Cup final, beating Wigan, Arsenal and Aston Villa in the process.

He acknowledged the vital part played by the club's fans in their best season for years.

"If you speak to people behind the scenes and in the city there is so much more positivity in the club in general.

"If any group of supporters deserve success then it is these ones," he said.

The former Colchester, Hull and Charlton boss joined the Valley Parade side in August 2011, but could only steer them to a second successive 18th-place finish last season.

The club's progress since then has been the result of a carefully implemented recruitment project.

"We decided that we wanted to run with a smaller squad, but with better quality players," Parkinson explained.

"I felt last year that through the sheer number of players at the club there wasn't the spirit required to get the club to where it needs to be.

"We drew up a shortlist of players that we wanted based on character, athleticism and how close they lived to the ground because I think that's important.

"We met with lots of players over the summer and some of them were bigger names than the ones we brought in but I didn't feel they wanted to be here for the right reason.

"Our aim was to put together a group of players that if we progress as a club, and hopefully we will this season, they can play in a higher division. The last thing you want is to get promoted and have to make wholesale changes."

Parkinson's contract is up at the end of the season, but chairman Mark Lawn is confident that it is a formality that he will stay on.

"Phil has agreed the format and the figures, we're just waiting on his assistant and fitness coach," Lawn told BBC Radio Leeds.

"As you can imagine all of the management team have said they want to wait until after Saturday to get it sorted and I'd have thought it will be done shortly after that.

"I've always been confident it would happen because we wanted him and he wanted to stay here."