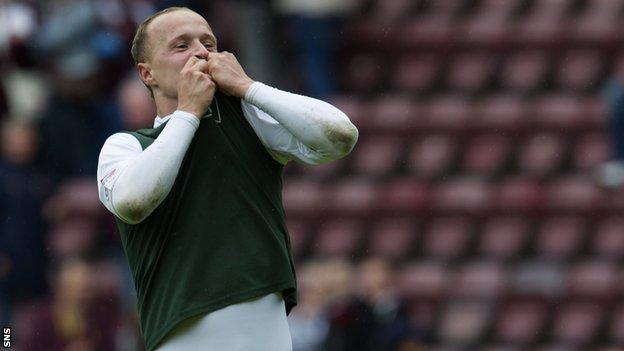 Leigh Griffiths has been named Clydesdale Bank Player of the Year while Victor Wanyama has topped the young player poll.

Celtic midfielder Wanyama had been on their young player award shortlist.

by the Clydesdale Bank's panel of football experts after leading Motherwell to second place in Scotland's top flight.

Griffiths' goal in Sunday's 2-1 win over Edinburgh rivals Hearts took the 22-year-old on-loan Wolves striker's tally to 28 goals this season, 23 in the SPL, and he is aiming for a club scoring record.

He told BBC Scotland: "It just keeps getting better and better, especially with yesterday's win at Tyncecastle and then to get this is a great achievement.

"I just wanted to try and have a good season, to try to top my goals from last season.

"I only got 11 last season, which is poor, especially for my record of previous seasons, so to get near the 30 mark, that was what I was aiming for.

"Twenty goals was my target, so I have passed that so now I hope to round it up to 30.

"I've equalled Steve Cowan's record and I want to try to break that and be the first player in over 40 years to score more than 30 goals.

"Hooper, Commons, Higdon and Niall McGinn, there's loads of players who could have won this award after great seasons and I'm absolutely delighted."

The 21-year-old Wanyama has become a mainstay of the Celtic side that has won a second successive title and will meet Hibs in the Scottish Cup final.

St Mirren midfielder Graham Carey's long-range strike against Hearts at St Mirren Park on 27 February was chosen as goal of the season.

Save of the season went to Celtic's Fraser Forster, the goalkeeper denying Gary Harkins in a match against Dundee on 24 February.

Kilmarnock winger Chris Johnston was named Clydesdale Bank Under-20 League Player of the Season and the 18-year-old's performances led to promotion to the Ayrshire side's first team.

Dundee United, whose DISC Target Project is run together with the local council, youth workers and the police to combat the high level of anti-social behaviour in the community, won the award for the Best Community Initiative.

For the fifth successive season, Motherwell won the award for being the club with the best media relations.