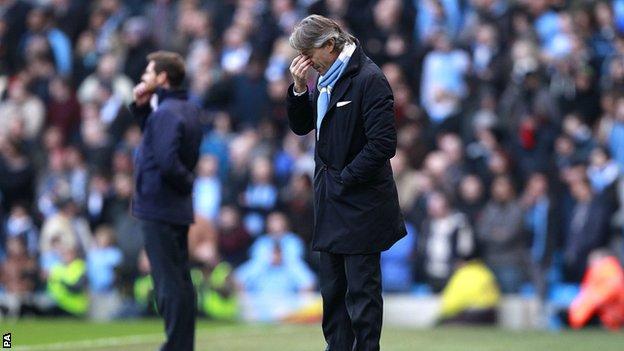 Manchester City spoke of the need to "develop a holistic approach" as one of the reasons for sacking manager Roberto Mancini - but more basic forces were at work in his dismissal.

When Mancini looks back on his City career one date will be forever ringed on his calendar. It is a date that brought an unwelcome symmetry to his time at Etihad Stadium.

It was on 13 May 2012 that the Italian enjoyed his finest moment when Sergio Aguero scored 100 seconds from the end of the season against QPR to give City their first title in 44 years.

And it was on the unhappiest of anniversaries, one year later, that Mancini's slow march towards the exit door was confirmed.

Mancini's highs and lows at City

If ever there was an example of how swiftly the scenery can shift in the modern Premier League it is the dismissal of a manager just 12 months after he delivered the greatest moment in City's modern history.

For all the fine words and expressions of admiration for Mancini contained in the farewell statement, he has gone simply because City believe results this season, and circumstances surrounding them, deliver proof that he was not up to the job of taking this fiercely ambitious club where they want to go.

There will be sympathy for Mancini, especially from City fans who supported him so vociferously throughout the FA Cup final defeat by Wigan at Wembley, as they will rightly remember him as the manager who - albeit briefly - freed them from the years of living in Manchester United's shadow.

City's statement, made when it became obvious Mancini was a lame duck after speculation that he was about to be sacked and replaced by Malaga's Manuel Pellegrini went unchecked, carried a ruthless tone.

It is clear the club's Abu Dhabi owners expected a more robust title defence rather than the concession to United. They certainly expected a more distinguished Champions League campaign than the horror show which saw them fail to win any of their six games, albeit in a group containing Real Madrid, Borussia Dortmund and Ajax.

The only target he hit to the satisfaction of those in Abu Dhabi was Champions League qualification and that, combined with other factors, was not enough to save Mancini.

Mancini's confrontational style, with public criticism aimed at goalkeeper Joe Hart among others, is neither here nor there if he can use a Premier League title as his shield but it is another matter in a season dotted with the sort of limp efforts such at that served up in the cup final defeat against Wigan.

Talk of tensions behind the scenes was rife and at times City have looked a team lacking spirit - yet when they won so impressively at Manchester United in April it was a vivid reminder of why they were the champions.

There was also a shift in emphasis at City that did not work in Mancini's favour. Chief executive Ferran Soriano and sporting director Txiki Begiristain arrived to bring their Barcelona experience to bear, to cast some Catalan colours on the Etihad canvas.

It would appear the style of the statesmanlike Pellegrini, who it is said regards the concept of entertaining and attacking football as non-negotiable, is an easier fit to this template than Mancini.

Having won the Premier League, the Champions League will have been fixed in the mind's eye of owner Sheikh Mansour and chairman Khaldoon Al-Mubarak. City's lamentable group phase, coupled with Mancini's unimpressive record in the competition with Inter Milan, will have hardened the belief that someone else was needed for this job.

Pellegrini has a decent record in the competition - he took unfashionable Villarreal to the semi-finals of the Champions League in 2006 - where they lost to Arsenal - before the Gunners also knocked them out in the last eight a year later.

His one season in the Champions League with Real Madrid saw a defeat in the last 16 at the hands of Lyon, but he was only denied from taking Malaga to the last four this season by Borussia Dortmund's remarkable fightback which saw them score twice in stoppage-time.

Sadly for City and Mancini, so aware of the rather undignified departure of his successor Mark Hughes in 2009, things were allowed to get messy and a few items of dirty laundry were aired in public.

"The key thing in the statement is the holistic side of it. I think what has gone against him is his man- management style. There are issues other than the performance that have undermined him.

"When you look at the flashpoints Mancini has had this season, that gives you an indication of the difference in holistic approach that City are looking for."

This surfaced in a tense briefing in Wembley's media theatre on Saturday when Mancini effectively, and unnecessarily, named and shamed the club's communications department for failing to kill off speculation about Pellegrini. He now knows why this was impossible.

And Mancini only needs to recall the circumstances of his own appointment, in through the back door as Hughes was going out of the front, to know there is an element of 'live by the sword die by the sword' in management.

As stated previously Mancini will have his sympathisers - and rightly so. He may have spent close to £300m but it bought the success that had eluded City for so long.

This season, however, shone a harsher spotlight on some of those purchases. The Mario Balotelli experiment ended with his sale to AC Milan after a series of non-performances, Edin Dzeko has looked a poor return on £27m and Samir Nasri has once again under-performed.

Mancini's departure also tells a tale of missed opportunity. In some respects City had the Premier League at their mercy last summer after winning the title but a sudden complacency seemed to take hold.

And this is where Mancini will forever complain about the hand he was dealt. It was obvious, and made obvious by him on countless occasions, that he wanted better signings than those that arrived last summer.

Mancini wanted Robin van Persie (although it was clear from very early on that he wanted Old Trafford), Eden Hazard and Daniele De Rossi. They either moved elsewhere or stayed put.

In their stead came an unremarkable stream of signings in the shape of Jack Rodwell,Maicon, Scott Sinclair, Javi Garcia and the outstanding exception Matija Nastasic. Strictly B-List when Mancini insisted he always wanted a stellar cast.

Place these circumstances together and you have route that led to Monday night's conclusion.

The next step is expected to be the arrival of Pellegrini. City have made their intentions clear. Sir Alex Ferguson calls Manchester United "the bus that waits for no-one" - Begiristain and his cohorts want to build a similar vehicle across the city.

A fierce Premier League response will be demanded while there must be no more embarrassments in the Champions League. There will not be a demand to win it but there must be no repeat of this season's shoddy effort.

Mancini is not a figure who attracts sympathy but there was something almost poignant about his last public words as Manchester City manager, sitting rain-soaked in front of the media at Wembley.

Asked about Pellegrini and his future he said: "We will see if it is true in the next two weeks. If it is not true you have written stupid things in the last six months. If it is true I'm stupid because I don't understand this."