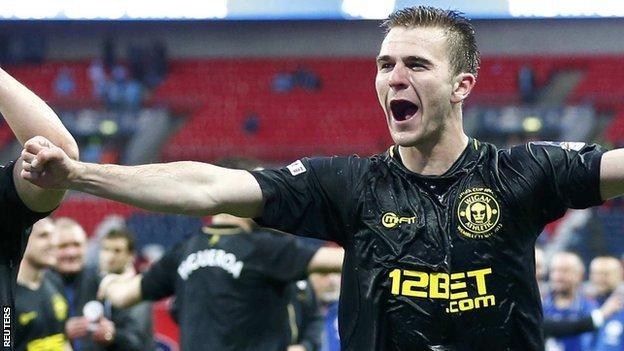 Wigan winger Callum McManaman has won his first England Under-21 call-up after being included in the squad for next month's European Championship.

McManaman, 22, was man of the match as the Latics beat Manchester City in Saturday's FA Cup final.

"I've made it my business over the last six weeks to have a really good look at Callum," said U21s coach Stuart Pearce.

"He's played so well and the culmination of that was a fantastic game in the final."

Speaking to the Football Association website, Pearce added: "We're pleased with his development and that happens with players.

"He came on the international scene a few years ago at U20 level, now he's found form at the right time, just before a major championship."

McManaman will be a straight replacement for Liverpool winger Raheem Sterling, who misses out on the 23-man squad because of a thigh injury.

Players are eligible for the 2013 championship if they were born on or after 1 January 1990.

Manchester City midfielder Jack Rodwell is another absentee for the tournament in Israel, with England's campaign starting with a game against Italy on 5 June.

Southampton left-back Luke Shaw, 17, received his first call-up in February for a game against Sweden but missed out on making his debut because of an injury.

He has again made the squad and could get a start, with fellow full-back Danny Rose suspended for the first match of the tournament.

Rose is banned after being sent-off in the racism-affected win over Serbia, which secured England's place at Euro 2013.

Winger Tom Ince was also suspended for one match after Uefa investigated the match against Serbia and he will also miss England's first game.

Steven Caulker has been in the last three senior squads under Roy Hodgson but drops down to the U21s to reinforce the defence.