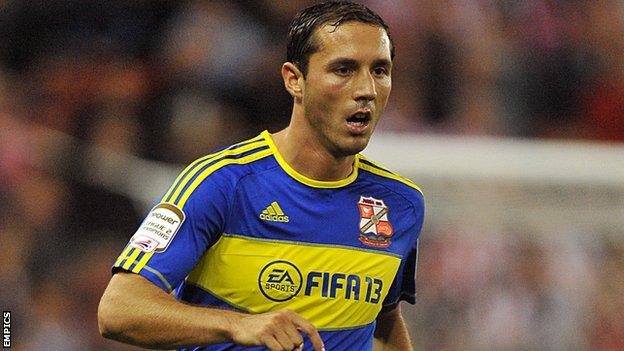 Portsmouth have agreed to sign defender Joe Devera from Swindon Town on a two-year contract.

The 26-year-old will move to Fratton Park on 1 July when his current deal with the Robins expires.

Devera was Paolo Di Canio's first signing as Swindon boss two years ago and made 66 appearances for the club.

"I don't really look at coming here as dropping down a league because they are a big club and can fight their way back," he told the Portsmouth website.

Devera, who began his career with Barnet, was a member of Swindon's League Two promotion-winning squad last season.

He played his final game for the club in the second leg of their League One play-off semi-final against Brentford earlier this month, scoring one of the goals in a 3-3 draw - which led to Swindon losing on penalties.

"Joe's a magnificent signing for the club. We couldn't believe Swindon had released him and got in touch right away," said Portsmouth manager Guy Whittingham.

"He has won the league we are now in with Swindon and then gone on to play with them in the league above as well.

"It's important to have players that have been on that journey because we're not just looking at the short term, but also to the future. "

Devera is the seventh player to agree to join Pompey since the end of the season, following Sonny Bradley, Danny East, Romain Padovani, Yassin Moutaouakil, Patrick Agyemang and Tom Craddock.