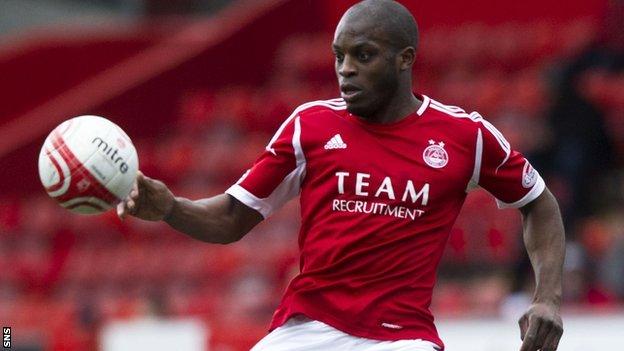 Family commitments were behind the decision not to offer a new contract to midfielder Isaac Osbourne, according to Aberdeen manager Derek McInnes.

"His family are living in the Birmingham area and he wants to go and join them again."

A fit Isaac Osbourne is an asset to Aberdeen, but unfortunately that was one where we made that decision together

Injury had also restricted the Englishman's chances to impress since McInnes took over from Craig Brown in March.

"In normal circumstances, I would be happy to work with Isaac," said the Dons manager. "He's been brilliant for me.

"The few games he's been available to me, he's been outstanding and I know he can play the level.

"But, as much as Isaac enjoys working with ourselves and working at Aberdeen, he enjoys being with his family more and that's the bigger pull for him.

"That's a situation we totally respect. In an ideal situation, a fit Isaac Osbourne is an asset to Aberdeen, but unfortunately that was one where we made that decision together."

Former Scotland midfielder Gavin Rae is another departing Pittodrie and McInnes admitted that releasing the 35-year-old was also a difficult decision.

"Gavin was very keen to stay," said the Dons boss. "We had a conversation and he said that, if there wasn't another year at Aberdeen, he would be looking to move to Australia.

"But I think that might even have changed. There might be one or two options for Gavin.

"Gavin is a top professional and he's certainly everything you want from your senior players in the dressing-room in terms of what he can provide on and off the park.

"But, for loads of reasons, we felt that one or two players in that area might be more beneficial to us.

"Gavin has had a tremendous career and that one was made with a heavy heart."

Including youth players, 11 will leave Pittodrie at the end of the season and two more who are under contract have been told to find new clubs.

However, not all the wages saved will be made available to McInnes.

"There's only a certain pot of money there," he admitted. "Hopefully some of the promising youngsters we have will help that situation.

"But, if we want to be in that top half of the table, we need to bring more quality into the side.

"We knew we had to freshen things up for next year and we had eight boys out of contract and they were the ones who were more vulnerable than others."