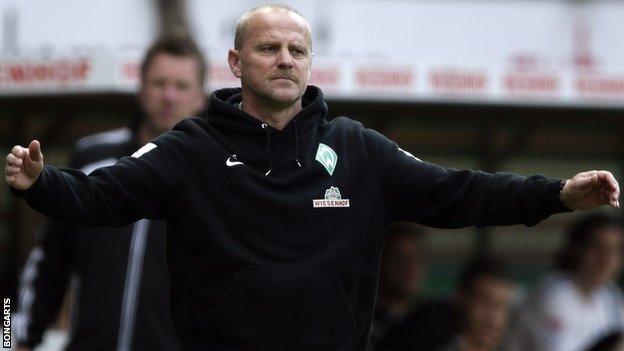 Schaaf, 52, was the longest-serving boss in the German top flight after taking over the northern club in 1999.

But Bremen have narrowly avoided relegation this term, and the parties decided on his exit by mutual consent.

Schaaf joined the club in 1972, was a first-team player for 17 years and then held several other coaching posts.

"I had an extraordinary time here, connected with a lot of positive experiences and great successes," he said. "I would like to thank everyone who accompanied me along the way and supported me.

The former Bremen youth, reserve and assistant coach also guided his side to the 2009 Uefa Cup final, where they lost 2-1 to Ukrainians Shakhtar Donetsk.

The team only guaranteed their top-flight status last weekend, however, after taking 34 points from 33 games.

Schaaf will not take charge of the final game of the season against Nuremberg on Saturday. Assistant coaches Wolfgang Rolff and Matthias Hoenerbach will replace him.