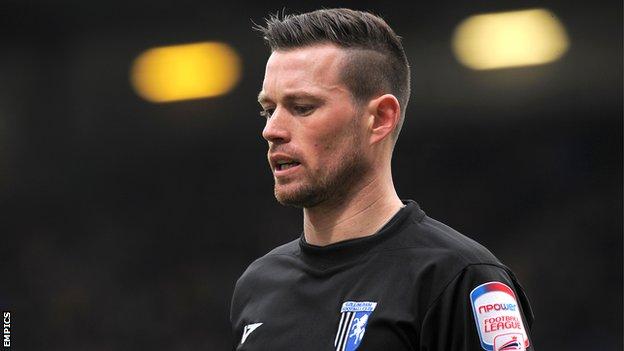 Gillingham goalkeeper Stuart Nelson says his decision to join the club has been vindicated after their League Two title-winning campaign.

The 31-year-old dropped down from the third tier last summer to join the Gills on a free transfer.

He told BBC Radio Kent: "Some might have said it was a step back. It was in the position in the Football League but not as a club.

"This is a club going places and I saw that the first day I came here."

Nelson praised the set-up at Priestfield immediately after moving to Kent in June last year and he played a large part in them winning the championship.

The former Brentford and Notts County stopper only missed one league game this season, which was due to suspension, and was named in the League Two Team of the Year by the PFA.

"With the manager, the set-up and what the chairman has with his input, and the facilities the club has got it could only go from strength to strength," he added.

It is Gillingham's first league silverware since 1963-64 and Allen's first promotion in his 18-year coaching career.

"Maybe people on the outside think he is mad but I have worked with him at a few clubs and you always see the reason for what he does," Gills keeper Stuart Nelson told BBC Radio Kent.

"He is a good man-manager who gets the best out of players.

"It is done in a different way but most of the UK are scared of change or someone doing things differently.

"How can you knock him and his methods when he has gone and got a league title?"

"I saw that at the start and felt I wanted to be a part of that. Other players who have come in have seen the same.

"Together we have done it and stepped on.

"Promotion was the ultimate goal and what we all spoke about at the start of the season.

"We've done it and being champions put the gloss on the top of it."

Meanwhile Nelson has praised the impact of Martin Allen, who was appointed Gillingham manager last summer.

Allen had previously had a reputation for saving clubs from relegation or mounting bids for the play-offs before his move to Kent.

The 47-year-old has picked up the nickname 'Mad Dog' for his tough-tackling playing style and his unconventional team bonding and approach to management.

However Nelson, who has played under Allen at Brentford, Notts County and Gillingham, has poured scorn on those who question the manager's methods.

"Those are people who don't know him," Nelson said.

"It's easy to pass judgement from the outside.

"The proof is in the pudding. If he is crazy and didn't know what he was doing then would we have won the league?

"That is some lucky guy if he has got a team to win the league in professional football.

"There is a reason behind everything he does.

"Maybe people on the outside think he is mad but I have worked with him at a few clubs and you always see the reason for what he does.

"He is a good man-manager who gets the best out of players. It is done in a different way but most of the UK, or maybe it's just human nature, are scared of change or someone doing things differently.

"He's got a league title now. Who is going to take that away from him.

"How can you knock him and his methods when he has gone and got a league title?"

Nelson says the focus will be on mounting another challenge for promotion when the Gills report back for pre-season training on June 26.

Allen has backed the majority of his squad to make the step up to League One.

"I have played the majority of my career in League One and there's not a massive gap," Nelson said.

"Teams have stepped up from League Two and done well.

"Stevenage got in the play-offs last season after coming up and Swindon were up there this year. It is definitely something which can be done."