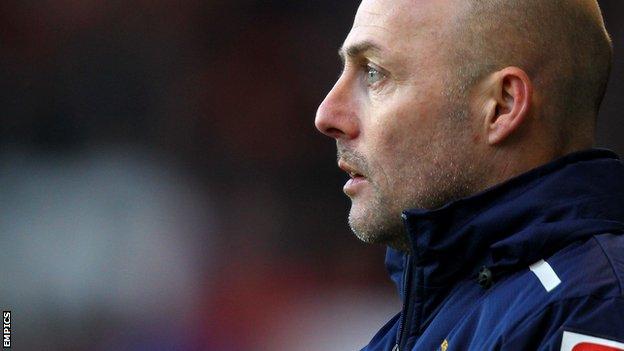 Newly-appointed manager Alan Wright has targeted a push towards the play-offs in his first season at Southport.

And he has lofty ambitions for the Sandgrounders, who finished one place and four points above the Conference Premier relegation zone in 2012-13.

"The goal will not be just to stay in the league. I want to finish in the top half, pushing for the play-offs," Wright told BBC Radio Lancashire.

"In an ideal world, you want automatic promotion. Everybody does. In a realistic world, if we finish in the top half and hopefully in the play-offs, I would consider that to be quite a successful season."

Southport were unable to match their seventh-place finish from 2011-12 this term, only securing their status in the top division of non-league football in the final week of the campaign.

Watson chose to end his second spell as Southport boss after the last game of the season and later became manager of AFC Telford.

Former Aston Villa and Blackburn defender Wright, who has coaching experience with Blackpool and Fleetwood Town, continued: "Liam did a fantastic job and you have to give him credit.

"His departure has given me an opportunity and hopefully I'll bring some success to the club as he did.

"I was disappointed at Blackpool when Steve Thompson wasn't given the job permanently [in February] because I was helping out with him. That taster there gave me the feeling that I wanted to go on and manage a team.

"It's something I've wanted to do for quite a while now. The opportunity has been given to me, so hopefully I'll take it with both fans and reward Southport with some success."