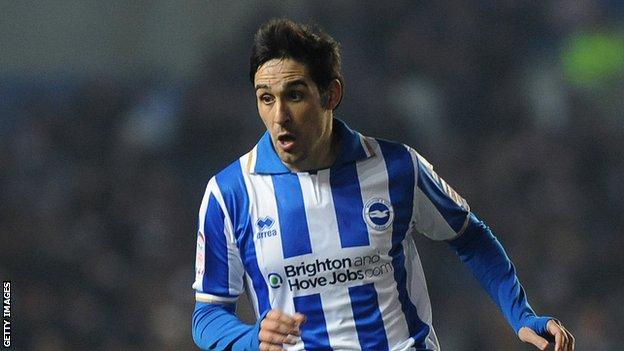 Meanwhile, the Championship club have exercised options on the contracts of five other players and extended their deals at the Amex.

Gordon Greer, Ashley Barnes, Peter Brezovan, Inigo Calderon and Will Hoskins will remain with the Seagulls until June 2014.

New deals have been offered to defender Adam El-Abd and midfielder David Lopez.

I would like to thank Gary, Marcos and Vicente for their efforts and wish them well in their future careers

Brighton manager Gus Poyet pulled of a major coup in September 2011 when he completed the signing of Vicente on a free transfer.

However the 31-year-old former Valencia man, who has been capped 38 times by Spain, had his spell in Sussex disrupted by a series of injures.

In 2011-12 he scored three goals in 19 appearances, but this season he was restricted to 13 outings, scoring twice.

Midfielder Dicker joined the Seagulls from Stockport in March 2009, initially on loan.

He signed a permanent deal later that summer and went on to play 129 league games for the Seagulls.

Painter helped Brighton to the League One title in 2011 after joining from Swansea in summer 2010 following a loan spell that year.

The left-back had a loan spell at Bournemouth earlier this season but only made five appearances for Brighton in the Championship.

Albion chairman Tony Bloom said: "On behalf of Brighton & Hove Albion, I would like to thank Gary, Marcos and Vicente for their efforts on behalf of the club and wish them well in their future careers."