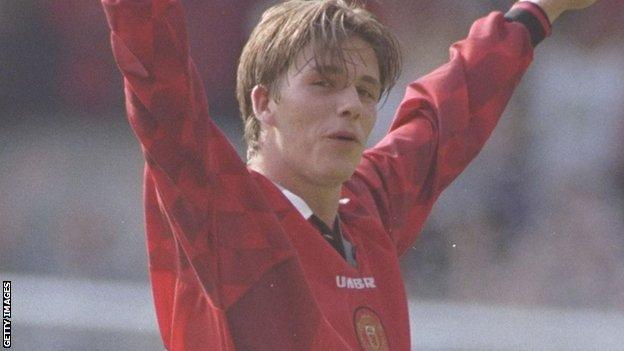 David Beckham announced himself to the football world when he scored from the halfway line for Manchester United against Wimbledon.

In United's opening match of the season at Selhurst Park, the midfielder spotted goalkeeper Neil Sullivan off his line to score a famous goal in United's 3-0 victory.

Former Wimbledon goalkeeper Sullivan told BBC Radio 5 live: "He just picked it up and hit it. I just realised it was going beyond me and it dropped [under] the crossbar and that was it. The whole Manchester United team at the time were special but I didn't expect anything like that. I made that boy... but I still think he would have done all right without me!" 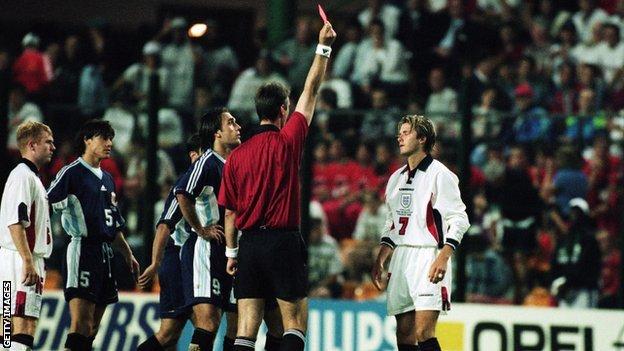 England lost on penalties to Argentina during the World Cup in 1998 after a 2-2 draw in St Etienne, which saw a wonder goal from Michael Owen and David Beckham's infamous red card after he kicked out at Diego Simeone.

Former England team-mate Alan Shearer told BBC Sport on Thursday: "You have to have character as a footballer. When you have your downs you have to show how strong a character you are and he did that after the World Cup in 1998." 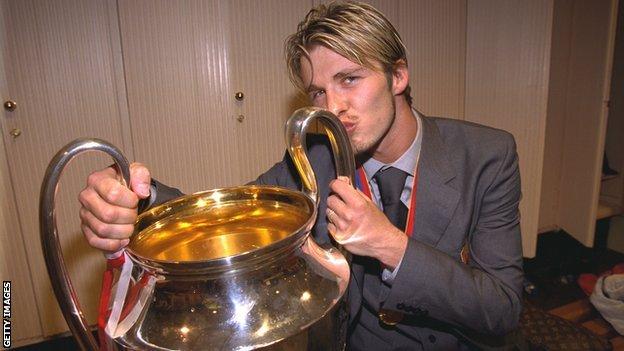 After Manchester United's Premier League title victory and FA Cup final win over Newcastle, a Champions League title followed on a most memorable night at the Nou Camp.

Former Manchester United and England defender Phil Neville told BBC Sport on Thursday: "David Beckham - what an unbelievable career. Four titles in four countries, over 100 caps for England and the best ambassador this country has had." 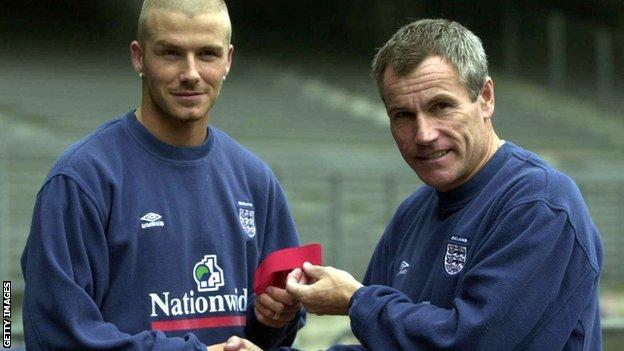 Under previous coach Kevin Keegan, the Manchester United midfielder had been appointed vice-captain in the absence of Sol Campbell.

Beckham told BBC Sport in 2000: "This is one of the proudest moments of my football career. It's always been a big ambition of mine. As a kid I used to dream about leading my country and now it is going to happen." 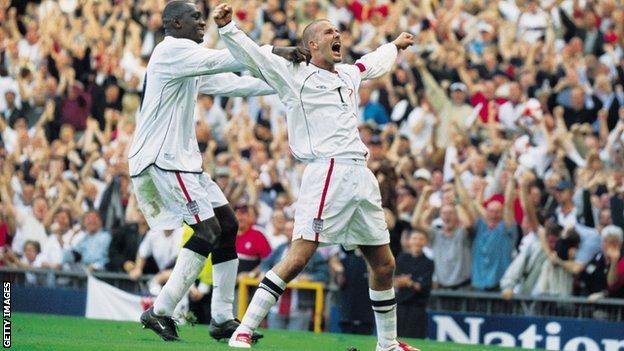 Beckham led by example against Greece in 2001 when his curling last-gasp free-kick sent England to the 2002 World Cup finals, where they were beaten by Brazil in the quarter-finals.

Former England manager Sven-Goran Eriksson told BBC Sport on 16 May that Beckham's winner against Greece was his personal highlight of the midfielder's career. "David had missed many free-kicks during that game but was mentally very strong to take it when it was almost overtime, and he scored." 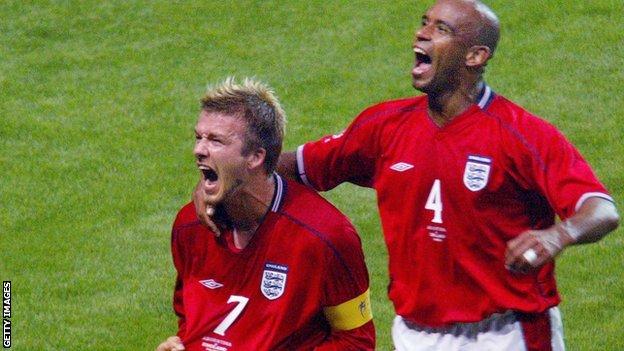 David Beckham fired England's winner from the penalty spot as they beat Argentina 1-0 in the group stages of the 2002 World Cup in Japan, and the goal seemed to rub out the memory of the sending-off in 1998.

Chief football reporter Phil McNulty said at the time: "If England rode their luck in the face of an inevitable second-half revival from Argentina, who is to say they did not finally deserve it after Diego Maradona's 'Hand of God' in 1986 and the desperate exit on penalties at France 98?" 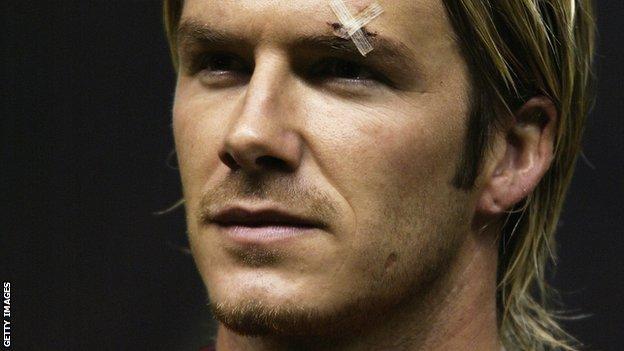 David Beckham made peace with Manchester United boss Sir Alex Ferguson in early 2003 after a dressing room argument left him with a cut above his eye.

Beckham described the incident at the time - in which Ferguson accidentally kicked a football boot against his face - as "just one of those things".

Ferguson said in 2003: "I have spent 29 years as a coach and what happens in the dressing room is sacrosanct. There is no problem and we move on. That is all there is to say." 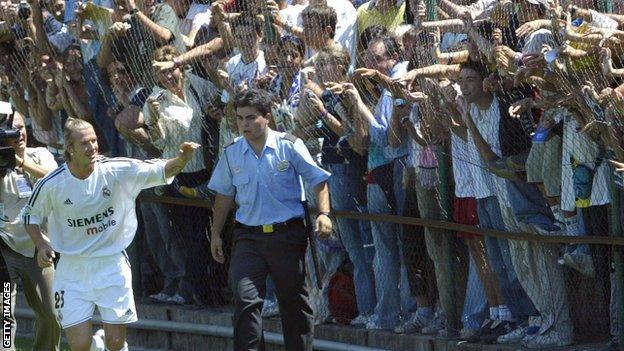 David Beckham agreed a four-year contract with Spanish giants Real Madrid for a fee of £24.5m from Manchester United.

Beckham's future at the time was the source of intense media speculation after his dressing room clash with Ferguson, with a number of top clubs including Barcelona, AC and Inter Milan interested in capturing the player. 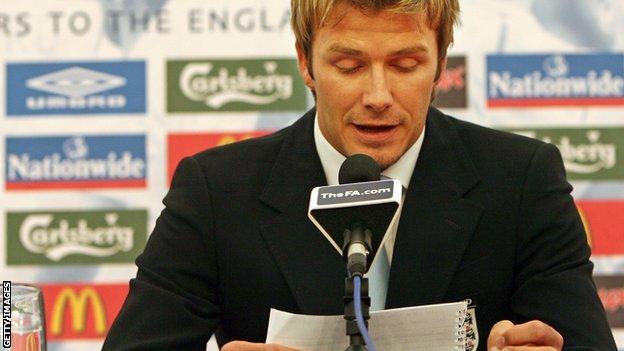 An emotional David Beckham stepped down as England skipper after holding the role for six years following England's World Cup exit against Portugal in Germany.

The midfielder said at the time: "I feel the time is right to pass on the armband as we enter a new era under new coach Steve McClaren." 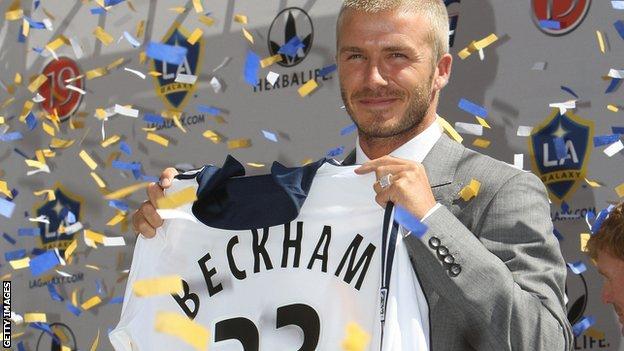 David Beckham left Real Madrid to join Major League Soccer side LA Galaxy at the end of the Spanish season in 2007.

The then 31-year-old signed a five-year deal, reportedly worth £128m between his salary, existing sponsorship contracts, merchandising shirt sales and a share of the club profits.

Beckham said on Thursday: "It is every athlete's dream to go out on top form or winning a trophy; it doesn't happen very often. I have been very lucky - winning the league with Manchester United, then at Real Madrid, at LA Galaxy and now PSG." 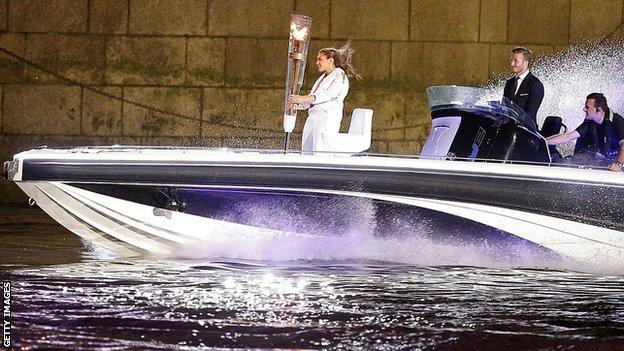 David Beckham made a spectacular entrance at the London 2012 Olympic opening ceremony, transporting the Olympic torch to the Olympic Stadium via a speedboat.

After Beckham played a key role in London being awarded the Games in 2005 an estimated 900 million people watched as the boat sped down the River Thames synchronised to a massive pyrotechnic display that included a curtain of fire descending from Tower Bridge.

Beckham told BBC Sport in July 2012: "To have an Olympic Games in London is amazing but to have it in an area where I grew up, I'm very proud to have been part of that for the last eight years." 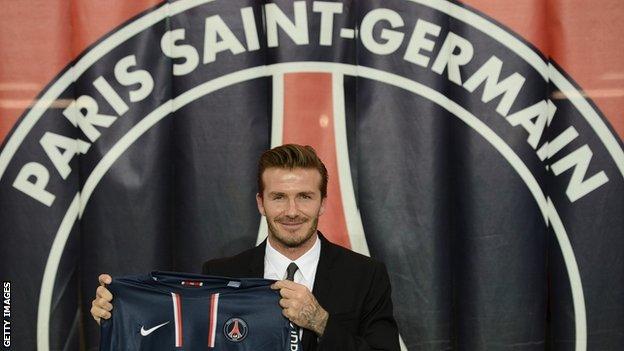 David Beckham said he was "excited and honoured" to join French Ligue 1 side Paris St-Germain and immediately announced that he would be donating his wages to charity.

The former England captain signed a five-month deal with the club after leaving LA Galaxy at the end of the MLS season.

Beckham said on Thursday: "I'm thankful to PSG for giving me the opportunity to continue but I feel now is the right time to finish my career, playing at the highest level."