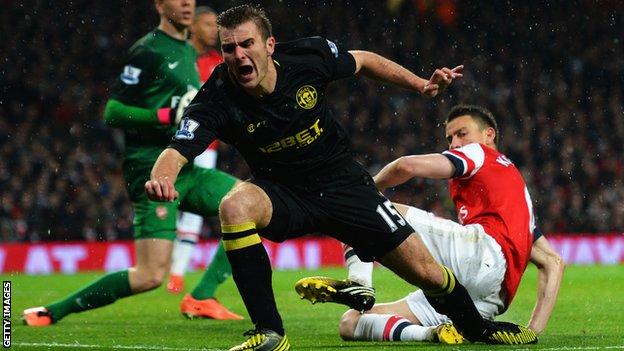 Wigan winger Callum McManaman has been ruled out of England's European Under-21 Championship campaign with an ankle injury.

He received his first Under-21 call-up on Tuesday, but misses the tournament after a week of mixed emotions.

"We have been fortunate - he doesn't need surgery," said manager Martinez.

"That is very encouraging because we feared the worst. I think he is going to be out for two-and-a-half to three months."

Liverpool-born McManaman produced a man-of-the-match display as Wigan won the FA Cup for the first time in their history with a 1-0 win against favourites Manchester City.

Three days later, he was named in England's squad for the European Under-21 Championship, which takes place in Israel next month, after impressing coach Stuart Pearce with his recent form.

But later on Tuesday, he was part of the Wigan side which was beaten 4-1 against Arsenal to seal the club's relegation to the Championship after eight seasons in the top flight.

McManaman was taken off on a stretcher at Emirates Stadium following a second-half challenge by Gunners defender Laurent Koscielny.

Wigan end their Premier League campaign with a home game against Aston Villa on Sunday.

"As you can imagine it is a massive blow for someone who deserved more than anyone to have a good send-off to the season at the DW Stadium on Sunday," added Martinez.

"Callum is disappointed but it's such a joy to see him playing his football. It's a joy for everyone. For me he's been one of the sparks of the season, and not just at Wigan.

"He's a real diamond of English football. He's got no reason to feel down at all."