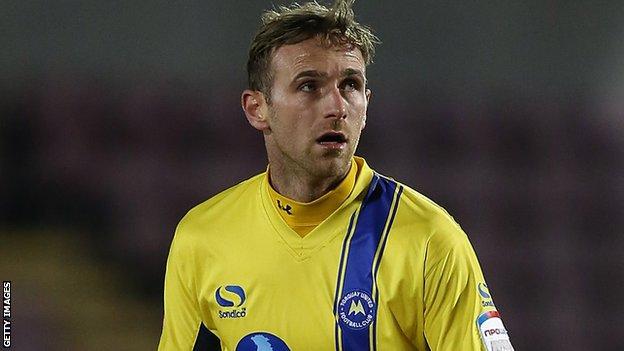 He told BBC Radio York: "After a five-minute chat with the manager, that was it. I know what he can do for players so I'm excited to work with him again."

Clay, 21, was recently released by Chesterfield after playing 35 times since turning professional in 2010.

York were under threat of relegation from League Two this season before victory in four of their last five matches pulled them up to 17th in the table, four points clear of the drop-zone.

The run of form resulted in Worthington being rewarded with April's League Two manager of the month award, while defender and captain Chris Smith won player of the month.

Both these players have good League Two experience but I believe they can play higher too. Hopefully that will be with us but there is a lot of work to be done

Worthington replaced Gary Mills as manager in March and after overseeing an end of season clear-out, in which nine players were released, has made Jarvis and Clay his first permanent signings since taking charge.

"Ryan Jarvis is a brilliant character with wonderful football ability and I think he's great addition," he said.

"I know him from when he was a boy, I gave him his debut when he was 16 years old and he'll add goals to the team, either from up front or on the wing.

"Clay has fantastic energy, likes a tackle and can get forward. He'll add some good enthusiasm and competition to our midfield."

Jarvis had been offered a new contract by Torquay, but turned it down in order to reunite with Worthington.

"We offered him a deal and to be fair, it wasn't the most money. I more or less said to him that if someone came in with a better deal and at his age, with another baby coming, he would have to take that," said Torquay boss Alan Knill.

"It was one of those situations where Ryan didn't have a choice. He did well for me at Torquay and good luck to him at York."