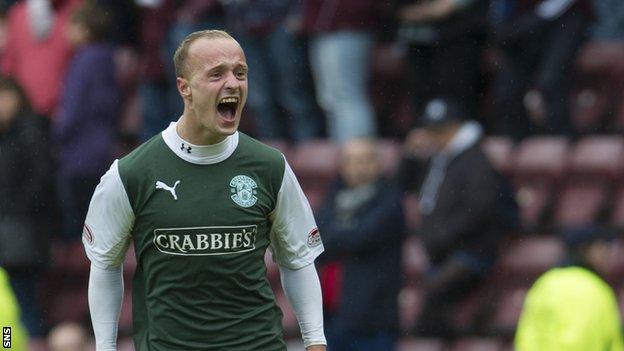 Wolves have confirmed striker Leigh Griffiths will be staying with the English club for a further 12 months.

Griffiths has impressed during his loan spell at Hibs, scoring 28 goals and earning three separate awards.

Wolves, who have been relegated from the Championship, have taken up their option to retain Griffiths.

One-year options on several players have been activated

The striker netted his 100th career goal in a 2-1 Edinburgh derby win over Hearts at Tynecastle.

The English club's Head of Football Development and Recruitment Kevin Thelwell explained: "Whilst we continue our search for a new Head Coach, one-year options on several players have been activated. This is normal practice in this situation.

"However, with regard to the overall first-team picture it is anticipated that there will be significant changes to the existing squad this summer.

"Talks with many of our senior contracted players will take place to discuss their futures.

"Certain players will be encouraged to find new clubs, while, inevitably, some will be sold with our best wishes and others retained. We will also looking to sign new players."