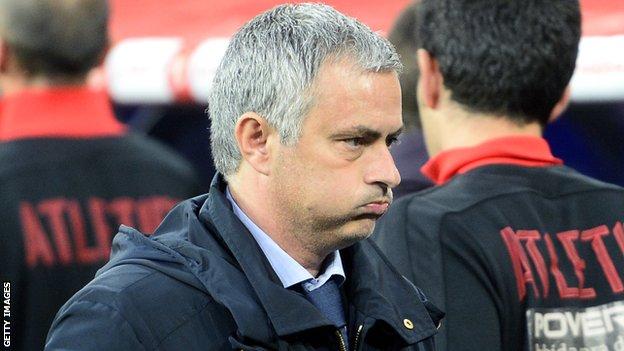 The Portuguese, who has been linked with a return to Chelsea this summer, said: "I have a contract that is valid for three more years.

"I still haven't talked to the president about my future.

"This year's campaign was a failure but my first two seasons were successful."

Real missed out on the La Liga title to Barcelona, while Mourinho's side lost 4-3 on aggregate to Borussia Dortmund in the semi-final of the Champions League.

Cristiano Ronaldo was also sent off in a bad-tempered Copa del Rey final at the Bernabeu.

Former Manchester United player Ronaldo put Real ahead with his 55th club goal of the season.

But Atletico hit back to beat their neighbours for the first time in 14 years.

"This was the worst season of my career," added Mourinho, who was sent from the bench in the second half for protesting against a refereeing decision.

"I don't think Atletico deserve to be champions but they won the title. We had two clear chances on goal, we hit the post three times... that is why I think it was unfair.

"Atletico's keeper was fantastic but he was also very lucky."