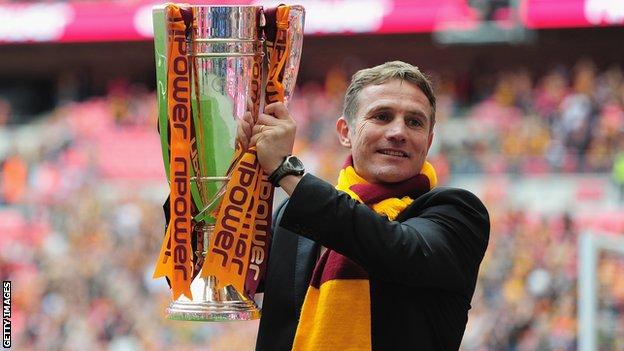 The Bantams were three up within half an hour against the Cobblers, thanks to goals from James Hanson, Rory McArdle and Nahki Wells.

"It couldn't have gone much better for us really," Parkinson said.

"To be 3-0 up at half time is beyond your wildest dreams and the second half was about seeing the job through."

He continued: "I told the lads at the break that we weren't there yet because if we gave them a chink of light then they're a good enough team to take it.

"I thought there was a ruthlessness about us in the second half and Rory McArdle and Andrew Davies were immense at the back.

"The strikers take the headlines, but the way we defended, won headers and blocked things was just as important as our goals."

The victory ended Bradford's stay in the bottom tier of English football after six seasons and earned their first promotion since they went up to the Premier League in 1999.

The Bantams were beaten 5-0 by Swansea in the League Cup final in February and Parkinson felt that recent Wembley experience played a part in his side's win.

"Without a shadow of doubt it helped us," he said.

"When we've had the celebrations this week I'll sit down with the chairmen and hopefully we can get it finished."

"You can be worried about how your family are going to get down and the extra press attention and demands. It can drain the players.

"We took that away from the players this time and said 'we're here to do a job and finish our season in style'."

The 45-year-old is now out of contract at Valley Parade.

However, Bradford chairman Mark Lawn said earlier in the week that it was a formality that the former Colchester, Hull and Charlton boss will be with the club next season.

Parkinson is hopeful that he, along with coaches Steve Parkin and Nick Allamby, will be able to sign new contracts in the near future.

"I've been saying all along that I hope it gets sorted," he added.

"I said when we all came together that I'd drive them mad and ask them to go above and beyond the call of duty but that we'd all get their rewards.

"I'd like to see everyone signs contracts at the same time. When we've had the celebrations this week I'll sit down with the chairmen and hopefully we can get it finished."