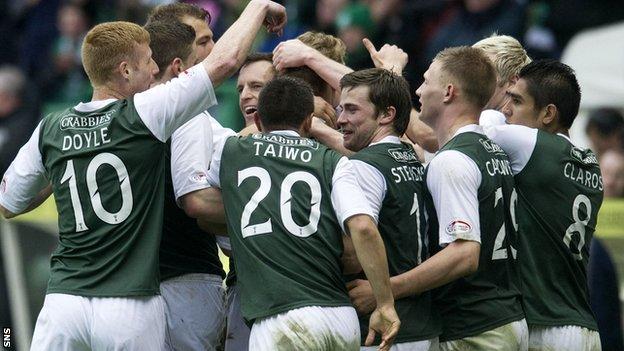 The Leith side made it three wins out of three with a 1-0 victory over Dundee at Easter Road.

"We can just focus on it now completely between now and next weekend and make sure we're prepared," said Fenlon.

"We're definitely going into it with a lot of confidence. We're playing well and looking forward to it."

Hibs dominated their final Scottish Premier League match of the season but it took until the 79th minute for them to hit the back of the net.

A superb David Wotherspoon header ensured they finished top of the SPL's bottom half in seventh.

And the home fans were pleased to see their on-loan Wolves striker Leigh Griffiths come through the game unscathed.

Griffiths has scored 28 goals for Hibs this campaign and the Hampden appearance on 26 May will be his last before returning to Molineux for next season.

"I saw the conditions and had a little worry alright but anything can happen in training or games.

"We asked them to keep it going and make sure we finished in that seventh spot.

"There was some great football played, some really good passing, crosses into the box and chances. Just a pity we didn't score a couple more."

Celtic manager Neil Lennon was among the crowd as he sized up his cup final opponents.

Hibs are looking to atone for a 5-1 defeat to Edinburgh rivals Hearts in the final of last year's competition.

Fenlon stated that the showpiece may come a little bit soon for defender Tim Clancy, who is recovering from injury, but midfielder Kevin Thomson will be available despite not making the bench against Dundee.

"The team's been playing well over the last few weeks which gives me a bit of a headache," he added.

"But I'd rather have that than not have enough players going into it. When you get to a cup final there are always big decisions to make.

"The one thing we didn't do last year was perform and that's something we need to make sure, that we give our supporters a performance."