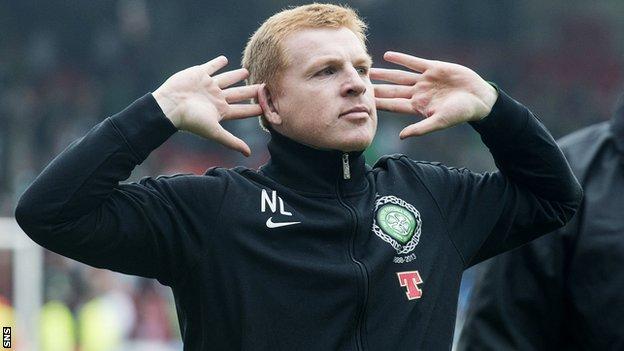 Celtic manager Neil Lennon was pleased to warm up for next weekend's Scottish Cup final with a comprehensive 4-0 victory away to Dundee United.

The Scottish Premier League champions are looking to complete a double when they meet Hibernian at Hampden.

"That performance sets us up nicely for next week," Lennon told BBC Scotland.

"I thought we were brilliant. The tempo of our passing was fantastic and Kris Commons is at the top of his game, ably assisted by the others."

Commons gave the visitors the lead with a 30-yard free-kick in the 11th minute before Georgios Samaras helped himself to a double, the first with a deflected drive in the 17th minute and the second a header 10 minutes later.

The only setback has been in the semi-final of the League Cup against St Mirren. But the players aren't robots

Lennon's side continued to dominate in the second half but only added to their lead with five minutes remaining when substitute Anthony Stokes found the net, also with the help of a deflection.

"It's difficult when you are 3-0 up to replicate that kind of effort, but we played very well in the second half and, but for the goalkeeper, it could have been a lot more."

The victory at Tanandice was Celtic's first league win away from home since February.

"We've been inconsistent at times," explained Lennon, whose side wrapped up the title in the first game after the SPL split and finished 16 points clear at the top.

"There is no doubt the Champions League games took a lot out of the players for the subsequent matches.

"And that's not exclusive to us, it's been the case for a lot of teams playing Champions League football.

"I wouldn't swap that experience for the world.

"We did what we had to do; winning the championship.

"The only setback has been in the semi-final of the League Cup against St Mirren. But the players aren't robots. They have been playing at the sharp end now for 11 months."

Lennon added that he would "like to augment the squad in two or three positions" over the summer before switching his attention back to next Sunday's cup final.

"Charlie Mulgrew, James Forrest and Adam Matthews are our only injury worries," he said.

"But we'll need to play well. I watched Hibs yesterday and they were excellent. They left a couple of players out as well.

"They will have a huge incentive to win it, but we have ours as well."