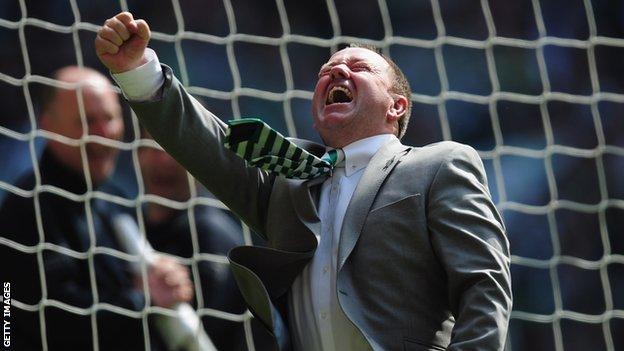 Yeovil Town manager Gary Johnson has paid tribute to the "unsung heroes" at the club following their promotion to the Championship.

on Sunday to reach the second tier for the first time.

"This is for the whole club," Johnson told BBC Points West. "The directors, the families, our supporters.

"It's about everyone who has done a wonderful job. They're all unsung heroes," he added.

"They all entered into this commitment of this ambition to get in to the Championship and they all believed in it.

"I said I'd try and steer the ship and we've done that. We all visualised winning at Wembley. Our dreams have come true."

With one of the smallest budgets in League One, Yeovil started the season among the favourites for relegation.

But they finished fourth in the final standings, two points behind the Bees.

Top scorer Paddy Madden, who was bought for around £20,000 in January, gave them an early lead and Fulham loan defender Dan Burn added a second just before half-time.

Harlee Dean pulled a goal back for Brentford and although they pushed for an equaliser, Yeovil held on.

"I really did feel cool and calm out there," said Johnson. "I've got Terry [Skiverton, assistant manager] and Darren Way [coach] to shout and scream for me. I've got a couple of Rottweilers there.

"It is incredible that a team of Yeovil's size can get to the Championship. They stood firm and it is a magnificent achievement."

"We won it in the first half. In the second half Brentford were the better side and had to throw people at it.

"They had six strikers on the pitch and we had to deal with it. And we did. I trust them so much, I just let them get on with it."

Johnson led the club from non-league to League One in his first spell at Huish Park between 2001 and 2005.

He went on to have managerial stints with Bristol City, Peterborough and Northampton before making a celebrated return to Yeovil in January 2012.

The 57-year-old is out of contract in the summer and said he would now enter negotiations over extending his stay.

"We'll be sitting down to talk," he confirmed, before joking: "They've got £4m now and that will be my salary, I don't know about the rest."