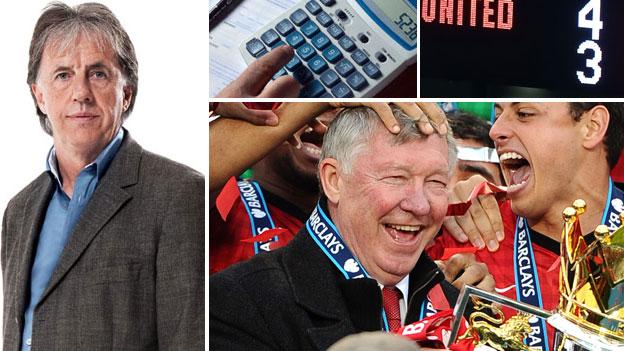 Over the course of the Premier League season, BBC Sport football pundit Mark Lawrenson has pitted his predicting wits against the likes of Hulk Hogan,Goran Ivanisevic and Lethal Bizzle.

After predicting a total of 379 results (he did not make a prediction before the rearranged Chelsea v Reading game on 22 August), the final table according to Lawro is below.

The last column on the right shows how many places higher or lower each team finished in this table compared to the actual Premier League standings.

According to the predictions, Sir Alex Ferguson would have bowed out by leading his Manchester United side through an unbeaten Premier League season with a record 96 points.

Nonetheless, Lawro's overall record is quite impressive. If you had made bets based on his predictions this season, you would actually have made more money than if you had staked your cash on the results calculated as most likely by the bookmakers.

What would have happened if you had applied a fixed formula to your predictions though?

One simple method would have been to predict a home win for every match as this is, on average, the most likely result during the course of a season. This result occurred 43.42% of the time (165 times out of 380), so it would not have beaten Lawro.

You could add a level of sophistication, by predicting a home win for each of the teams except when they are facing one of the top five. So when the top five were playing away against sides in sixth to 20th positions, you would predict an away win. When two top five sides play each other,you predict a home win.

This would have given the correct result 50.53% of the time, which still means Lawro would have come out on top.

If I could successfully predict all the results, do you really think I'd be here? I'd be on a yacht in the Caribbean drinking a gin and tonic

However, the former Liverpool and Republic of Ireland defender still has some way to go to please all of his followers.

Julian Adamson contacted BBC Sport to say he and some friends found Lawro's predictions so predictable that they played a game called 'Predicting Lawro's Predictions'.

And he did not predict that a side would score four goals or more in any of the 379 games. In reality, this happened 43 times out of the 760 individual scores (5.66%).

Lawro does not really go for away wins. He predicted that eight teams (Aston Villa, Fulham, Norwich, Reading, Southampton, Swansea, West Brom and West Ham) would not win ANY of their away fixtures this season. In fact, Villa, Swansea and West Brom all won more away games (five) than sixth-placed Everton (four).

He predicted that Fulham and West Brom would lose EVERY away game (scoring only four and six goals respectively), and drew the ire of Southampton fans by predicting they would lose 15 straight games at one stage of the season.

Lawrenson says: "It's meant to be a bit of fun, although I've lost count of the number of times a fan has stopped me outside a ground to say 'your predictions are rubbish'.

"I respond by saying 'if I could successfully predict all the results, do you really think I'd be here? I'd be on a yacht in the Caribbean drinking a gin and tonic'."

He admits he does not usually employ a strategy for predicting results, preferring to use "gut instinct". Saying that, he was not surprised by some of our findings.

"I probably only go for away wins for the top half dozen teams, because teams below them don't win too many away games. And perhaps I don't predict drubbings because I don't want to upset fans of the losing side.

"The first 10 weeks of the season are probably the trickiest, because you don't have too much idea about form at that stage.

"You've also got to remember that I do the predictions on a Thursday, to go up on the website on a Friday, which means I don't know all the injury news at the time. So I'm delighted to hear I've beaten the bookies, because in my experience they don't get too many things wrong."