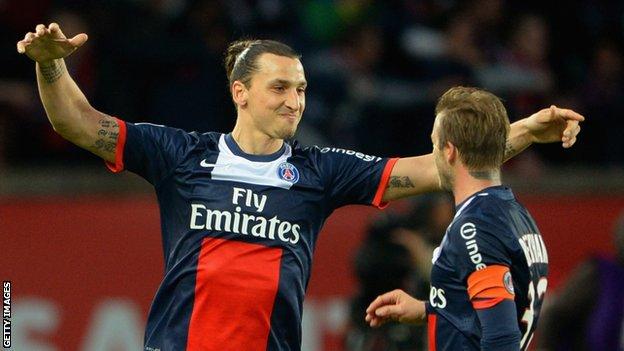 Paris St-Germain striker Zlatan Ibrahimovic was named the Ligue 1 Player of the Year as the Swede and his team-mates dominated the awards.

Ibrahimovic, 31, has scored 29 top-flight goals on the way to the ambitious capital club winning their first French title since 1994.

In total, seven PSG players featured in the Team of the Year.

"I don't need a Golden Ball to demonstrate that I am number one."

"I have won everything in Italy. I don't know what else I can still do here, other than keep going and build a collection."

The Player of the Year award had been won for the past two seasons by winger Eden Hazard, who left Lille for Chelsea in a deal reported to be worth £32m in June.

Ibrahimovic joined PSG from AC Milan last summer for a reported £15.7m. Their title victory was the eighth of his trophy-filled career - with a further two stripped because of a match-fixing scandal with Juventus.

With one game left to play away at Lorient next Sunday, his tally is currently just one shy of the French all-time record for a season of 30 goals, set by Jean-Pierre Papin while playing for Marseille in 1989-90.

Ibrahimovic's strikes helped him edge out colleagues Thiago Silva and Blaise Matuidi, as well as the league's second top scorer, St Etienne's Pierre-Emerick Aubameyang, for the lead players' prize when it was announced on Sunday.

Ancelotti - who has asked permission to leave for Real Madrid - shared the best coach honour with Christophe Galtier after the 46-year-old ended St Etienne's three-decade long wait for silverware with victory in the Coupe de la Ligue.