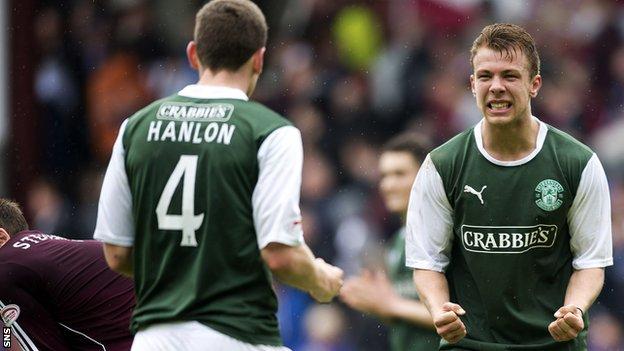 McPake returns to training on Tuesday, having missed the club's last three matches with a back injury.

Forster, 19, has partnered Hanlon in wins against Hearts, Kilmarnock and Dundee to put himself in the frame to face Celtic at Hampden.

"He came in for his debut in an Edinburgh derby away from home and that's not easy to do. As an experienced player, Tynecastle is a tough place to go.

"So, he's got that under his belt and that will stand him in good stead if he is picked for the final."

Forster left Celtic to join the Easter Road club three years ago and Hanlon, who is likely to lead the side if McPake is not fit, believes his fellow central defender can build on his impressive start to life in the senior ranks.

"He's got a bit of everything," Hanlon added. "He's aggressive, he likes to go and attack the ball and make a tackle.

"But he also likes to get the ball down and pass it as well.

"If he keeps working hard, I'm sure he has a bright future in the game but I'm sure he's not looking any further forward than the weekend.

"Hopefully, all of us can train well and be in the manager's thoughts for the weekend."

Right-back Tim Clancy will also return to full training on Tuesday, having been troubled by stomach and groin problems throughout the second half of a season that saw Hibs lose momentum after a promising opening to their SPL campaign, and finish in the bottom six.

However, the Edinburgh team are unbeaten since their remarkable comeback from 3-0 down against Falkirk in the semi-final at Hampden.

And Hanlon and his team-mates have been buoyed by that run of form.

"We've had three great results in the league, three good wins, and we take confidence from that," explained the former Scotland Under-21 international.

"If we'd maybe been on the back of a couple of bad results it would be difficult to pick up the confidence but it's already there and we're ready to go."

Hibs can also take heart from a share of the league spoils with champions Celtic this term.

"We had a disappointing result not so long ago when we were beaten 3-0 at Parkhead," added Hanlon.

"So, if we play as well as we did in those games, we'll have a chance of winning that cup."

Some wonderful players have graced the Hibs number four shirt, without managing to lift the Scottish Cup.

Bobby Combe, Pat Stanton, Des Bremner and Franck Sauzee all experienced heartache in the quest to end the club's long quest for a first success since 1902.

Hanlon is next in line, having tasted bitter disappointment in last year's final, against city rivals Hearts.

"It's something every Hibs fan dreams of and it would be amazing if we could do it," he said.

"But we know how hard it's going to be and how much effort we'll need for that to happen.

"Every Celtic player is a good player. We need to be aware of them all really. We need to match them to a man."