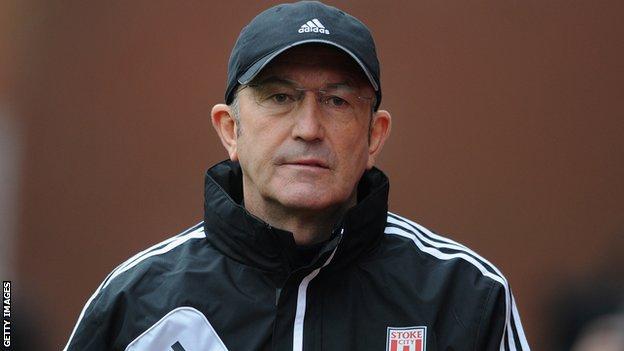 Pulis's future has been in doubt for some time and he has been told the club feels the time is right for him to leave after seven years in charge.

The 55-year-old was appointed Potters boss for a second time in 2006, and two years later he guided the club to the top flight after a 23-year absence.

The Potters released a brief statement saying: "Stoke City and Tony Pulis confirm that they have mutually agreed that Tony will leave the club with immediate effect."

Pulis was the subject of unrest from some fans towards the end of the season as Stoke flirted with relegation, but the Welshman stated on several occasions that Premier League survival remained the club's main objective.

Stoke made a strong start to the campaign and were just four points off the top four on 1 December. However, they only managed four league wins in 23 subsequent league matches, suffering 11 defeats.

Former England international Michael Owen, who has retired from playing after a season at Stoke, praised Pulis on Twitter, writing: "No denying he did a great job getting them to the Premier League and keeping them there."

Pulis becomes the 56th Premier or Football League manager to leave his job since the start of the 2012-13 season.

He first took over at Stoke in 2002 and stayed for three years before a season at Plymouth. He returned to the Potteries in 2006 and gained promotion to the Premier League in the second season of his second spell in charge.

Stoke never finished lower than 14th in five top-flight campaigns under Pulis and he led the club to their first FA Cup final in 2011, when they lost 1-0 to Manchester City. The defeat still offered a route into the Europa League, where Stoke were beaten in the last 32 by Spanish side Valencia.

When David Moyes officially leaves Everton for Manchester United, Newcastle's Alan Pardew will become the second longest-serving manager at a Premier League club - a mere two and a half years after taking charge.

During his second spell at the club, the former Bournemouth and Bristol City manager guided his side to 122 wins in 333 games.

Ahead of Stoke's 1-1 draw at Southampton on the final day of the season, Pulis expressed his desire to remain at the club next season.

Stoke's direct and physical style of football often drew criticism from other supporters and managers, and the club appear to be set to embark on a new direction, with director of football John Rudge also leaving this summer.