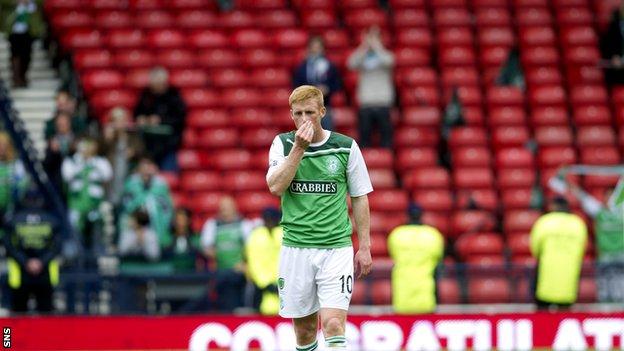 The act of redeeming or atoning for a fault or a mistake.

When Craig Thomson blew the final whistle of the 2012 Scottish Cup final, one half of Hampden Park celebrated the most famous of victories for one of Edinburgh's big two.

The other half had already gone home.

Rudi Skacel scored Hearts' fifth goal with 15 minutes still to be played of the 5-1 rout, but a large chunk of a disgusted 20-plus thousand Hibees had already headed for the hills with the sole intention of getting as far away from the National Stadium as their legs would carry them.

And who could blame them? The most numbing of defeats and at the time, something they could surely never get over.

Their bitter rivals had claimed the ultimate bragging rights.

The nightmare that played out through Pat Fenlon's lenses 12 months ago will have no doubt left a scar, but will also have lit a fire inside the Hibs boss.

That this wouldn't happen again under his watch, that they could and would be back for redemption.

Celtic will start as favourites and rightly so. But Hibs have an act of atonement on their minds: redemption

Scottish Cup heartache is nothing new to those who hail from the south shore of the Firth of Forth: 111 years and nine of their final defeats have now passed since the cup sat proudly in the Easter Road trophy cabinet.

But, a year on from the ultimate humiliation, fate has handed them the chance to cleanse themselves of the hiding dished out by the maroon half of Edinburgh.

Indeed, Hibs claimed some kind of revenge early in this season's competition when they knocked the holders out in round four, courtesy of David Wotherspoon's late effort.

But they knew that was just the start of the journey as the defiant 5-1 hand gestures continued from the Easter Road away end afterwards.

It's a journey to the final that has paired them with Celtic, the opposition in the 1902 final when Hibs last lifted the Scottish Cup.

But it's also the opposition who have beaten them in four of their 10 final defeats in this competition.

And after recent Hampden horror shows, Neil Lennon and his men have a burning desire to add the Scottish Cup to the 44th league title that was sealed a matter of weeks ago.

They wouldn't readily admit it, but if the Parkhead side end the season without the league and cup double, it will rankle with them.

Hampden has not been a happy hunting ground for Celtic since Lennon replaced Tony Mowbray more than three years ago.

Victory in the 2011 Scottish Cup final apart - there has been little to cheer for the silverware-hungry Celtic support when making the short journey from east to the south side of Glasgow.

High-profile Scottish Cup semi-final defeats to Ross County - though not Lennon's team - in 2010 and Hearts last year have been matched in the League Cup with Kilmarnock beating them in last season's final and St Mirren in this season's last four.

They also lost a League Cup final to Rangers after extra-time in 2011.

Does Anthony Stokes come into the manager's team?

The Irish striker and former Hibee missed a large portion of the season due to an ankle injury, but has scored six times against his old team since leaving them in 2010 and also got the winner in the epic semi-final victory over Dundee United.

With Gary Hooper and Kris Commons likely to start, Georgios Samaras, James Forrest and Stokes will also be vying for places in the starting line-up.

Fenlon's biggest concerns are how open he plays, with youngster Ross Caldwell itching to partner the prolific Griffiths up front after his recent Tynecastle winner.

The other is the fitness of McPake with 19-year-old Jordon Forster stepping into the captain's boots in recent weeks.

The exciting Alex Harris could also light up Hampden having got Hibs on their way to that stirring fight-back from 3-0 down in the semi-final win over Falkirk.

Celtic will start as favourites and rightly so.

But Hibs have an act of atonement on their minds: redemption.