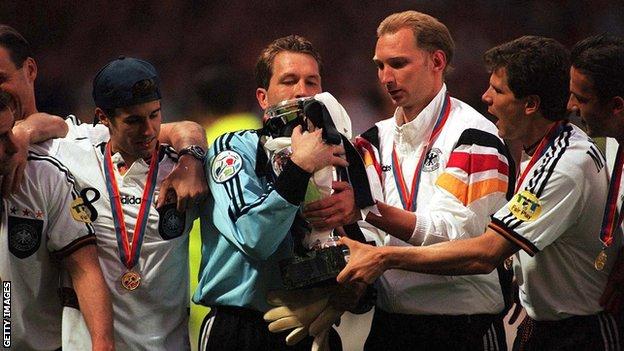 A final they go on to win. Naturally.

It may seem like five minutes ago but it has been 17 years since a German team last won a truly significant match at Wembley - World Cup qualifiers don't really count, apologies - but the mythology that is attached to the stadium has been undiminished.

Historical pieces about the "White Horse Final",Bert Trautmann's heroics in 1956, German fans' attempt to rig the internet poll for the naming of the new Wembley bridge - they suggested it would be called "Dietmar Hamann" - and obviously "that Geoff Hurst goal" from the 1966 World Cup final (or non-goal, from a German point of view) have been common place in the German papers ever since Bayern Munich and Borussia Dortmund decided to gatecrash the Football Association's 150th year anniversary by making it through to Saturday's final at the famous ground.

For many Germans, Wembley and its much-mentioned "hallowed turf" - a few synthetic patches produced in the Netherlands notwithstanding - is synonymous with English football and thus with modern football itself. Consequently, it is not so much Schadenfreude about getting one over the English that has fed excitement but pride about being good enough to grace this glorious occasion in the first place.

"This is a chance to show the world that German club football is alive, that it has caught up with the competition," Bayern honorary president Franz Beckenbauer told German newspaper Munchner Merkur this week.

The 67-year-old has, interestingly, only fond memories of Wembley: "I mostly remember the 1966 World Cup, the start of my international career. The final against England, favourites at the time, was one of the highlights. If you like, English football has helped me to my career."

Beckenbauer's sentiments are not as surprising as they might seem at first. The controversial 4-2 final defeat at the hands of Alf Ramsey's men in 1966 - and Azeri linesman Tofik Bahramov - does not nearly evoke the same amount of angry or despondent emotion in Germany as the 3-2 defeat by Austria at the 1978 World Cup or the disastrous performances at the 2000 and 2004 European championships.

Maybe subsequent Wembley wins in 1972, 1996 and 2000 - as well as two World Cup triumphs - have diminished the relevance of the 1966 result, and maybe most (West) Germans, including Helmut Schon's young team, thought they would lose the game anyway, as Beckenbauer suggests.

Perhaps Frank Lampard's wrongly disallowed effort in Bloemfontein at the last World Cup has also really evened things up, belatedly. Whatever the exact reason, Wembley 66 has certainly become a genuine part of German football folklore, a nostalgic footnote that is remembered with a wry smile rather than clenched fists.

While Wembley references have loomed large in the German media, few players or officials have talked much about it. There's a lack of familiarity, for starters: with the exception of Arjen Robben, who hobbled off as a substitute in Chelsea's 2007 FA Cup final win against Manchester United, none of the expected starters have ever featured in a competitive match at the ground.

The best Bayern captain Philipp Lahm could offer was "it's a nice stadium, I've won a game there"; the 29-year-old full-back played as a holding midfielder in the 2-1 friendly win by Germany against Steve McClaren's England in 2007, such was the paucity of Joachim Loew's options after a spate of withdrawals.

But the Bavarians also made a conscious effort not to overplay the significance of the event, having learned the hard way from last season's "final at home" defeat, when they lost to Chelsea at the Allianz Arena, that over-emphasising the sense of occasion can prove counter-productive. "I wasn't at the club at the time, but I noticed that everything centred around talk about the final [at home] and that Bayern had to win it by all means," said sporting director Matthias Sammer, who won Euro 96 at Wembley.

"We ended up frantically chasing things. Thank god this is not a final at home. All we have to talk about is the way we play." Sammer, 45, also dismissed a suggestion that Bayern staying in the same team hotel - The Landmark in Marylebone - as Berti Vogt's Euro 96 champions could be construed as a good omen. "Irrelevant," he shrugged.

"Wembley calling," it said on the T-shirts Dortmund immediately donned after knocking out Real Madrid at the Bernabeu in the semis. But that is probably the last time the stadium has been explicitly mentioned by the Black and Yellows too. Borussia's "story" is is so strong that it can make do without added glamour.

A few years ago, they were on the brink of financial collapse. Now they have re-established themselves as the second most powerful team in the Bundesliga with a young team full of exciting players and Jurgen Klopp, the coolest (and most coveted?) manager in Europe.

It is fair to say that a U-turn on the proposed alcohol ban around the ground has only raised excitement levels among the approximately 60,000 German fans who will make the journey.

But there is some disappointment that unlike in 1966 and 1996, Queen Elizabeth II will not be there to present the trophy.

You can't have it all.