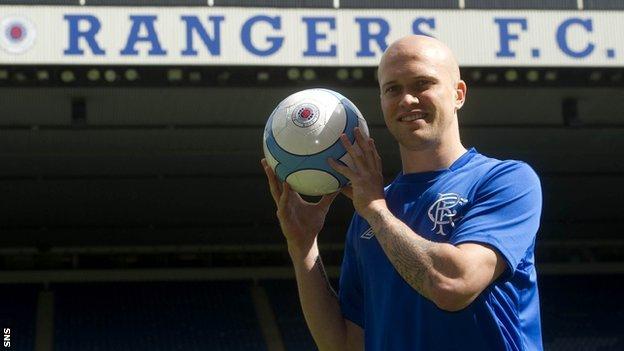 Midfielder Nicky Law has agreed a three-year contract with Rangers as it was confirmed that forward .

The signings will take effect from 1 September as Rangers are currently subject to a transfer embargo.

Law, 25, has spent the last two seasons at Motherwell, with whom he scored 13 times in 86 appearances and twice qualified for European competition.

The United captain scored more than 70 goals for the Tannadice outfit and won the Scottish Cup with the Tangerines in 2010.

"I didn't really want my agent to speak to any other clubs, I wanted to try to get this deal over the line and thankfully that has happened," Daly told the Rangers website

"I've taken a step back in terms of the level of football I'll be playing but in terms of club size, Rangers are massive.

"There's a huge fanbase and when the chance came up to come here it was a no-brainer for me. It was a challenge I wanted to take on."

Speaking about his move to Ibrox, Law said: "I'm delighted and honoured to sign for this great football club.

"I spoke to a few teams down south, but when I met the manager here and left that meeting, my gut feeling told me that this is where I wanted to be.

"I signed for Motherwell two years ago really on the gut feeling that that would be the best move for me and I've just gone with that again with this one.

"There are not many better places to go and play your football.

"This was the biggest club that I could have signed for. It was as simple as that, really."

which is required to play league football.

Rangers say the manager hopes to announce more signings "in the next few weeks".