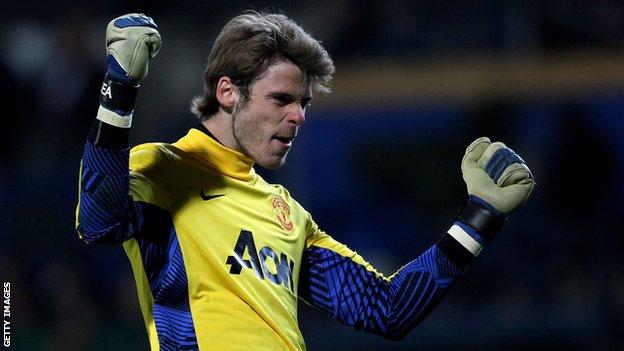 Manchester United goalkeeper David De Gea has been included in an experienced Spain squad for June's European Under-21 Championship in Israel.

The 22-year-old is one of five players named in the 23 who helped Spain lift the trophy in 2011 in Denmark.

Wigan loanee goalkeeper Joel Robles, 22, has also been been selected.

Robles joined the Latics on loan from Atletico Madrid in January and helped them to win the FA Cup earlier this month.

De Gea, who became the world's second most expensive goalkeeper when he signed for Manchester United from Atletico Madrid in June 2011 for £18.9m, has 22 caps for the Under-21 team.

Barcelona's Martin Montoya and Villarreal's Diego Marino join De Gea, Alcantara and Muniain in the squad as players who took part in the 2011 triumph.

Spain coach Julen Lopetegui believes his side - who begin their title defence against Russia before facing Germany and Holland in Group B - have a tough task ahead to retain their trophy.

They qualified for the finals, which take place in Jerusalem, Tel Aviv, Netanya and Petah Tikva, with a near-perfect record of nine wins and a draw and will travel to their base camp in Israel on 3 June, three days before their opening game.

Lopetegui said: "This tournament is a very attractive one and contains some really big names. The feelings are very positive.

"The three national teams we will face in the group stage are all very competitive and contain players with a lot of experience who have featured for their seniors. We have a wonderful challenge ahead of us."