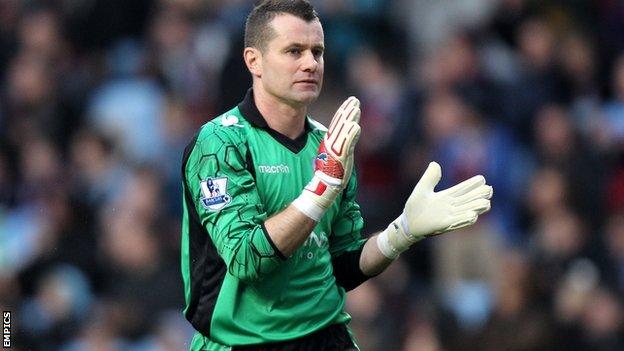 Aston Villa keeper Shay Given looks set to leave the Midlands club to go in search of first-team football after being kept sidelined for most of the season by the form of Brad Guzan.

After starting the campaign as number one, the 37-year-old former Republic of Ireland keeper lost his place to Guzan.

"I had a meeting with manager Paul Lambert," Given told the Irish Sun.

"We both agreed that I should be playing first-team football. And that's not happening at Villa right now."

Given signed a five-year deal when he was brought in by Alex McLeish from Manchester City in July 2011.

But, once he had been dropped following back-to-back defeats in the opening two Premier League games of the campaign, he was restricted to cup appearances only.

He is now expected to leave, along with his two old Republic of Ireland team-mates, defender Richard Dunne, 33, who has not played since Ireland's Euro 2012 clash with Italy last June, and midfielder Stephen Ireland, 26.

Guzan, 28, signed five years ago by Martin O'Neill, has certainly seized his chance since being promoted to first-choice keeper by current boss Paul Lambert, playing a key role in Villa's Premier League survival.

His old Villa goalkeeping rival, and fellow American, Brad Friedel, whom he understudied for the first three years of his move to Villa in 2008, already sees Guzan becoming a fixture at the club.

Guzan had made just made eight Premier League appearances (two of them as substitute) in four years before this season but, since replacing Shay Given for the 1-1 draw at Newcastle on 2 September, he has played 36 consecutive league games

"If he keeps playing like he has done this past season, he could be Villa's goalkeeper for a long, long time," Friedel told Villa's club website.

"He could be Villa's number one for over 10 years. It's entirely up to him by way of his performances.

"We saw immediately what a great player he was when he stepped through the doors at Bodymoor Heath.

"Brad had things you just couldn't coach - bravery and a base of power and strength.

"I don't think the management staff signed him to be a number two for his entire stay. They bought him to groom him to be number one.

"We signed at the same sort of time. They tried to get him the transfer window before but the permit wasn't forthcoming.

"When we signed together, I was 37 years old. They were almost signing me a stop-gap while they groomed Brad for the long-term. It's now really nice to see him getting the chance."