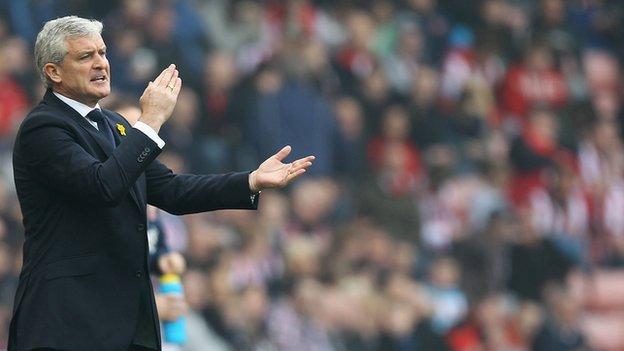 Mark Hughes has been appointed Stoke City manager, six months after being sacked by QPR.

He replaces fellow Welshman Tony Pulis, who left Stoke by mutual consent last week after seven years in charge at the Britannia Stadium.

Former Manchester City manager Hughes, 49, has been out of work since leaving QPR last November.

He endured a difficult time during his 11-month spell at Loftus Road, winning only eight of 34 games in charge.

The Welshman failed to secure a victory in the opening 12 league matches of the 2012-13 season, leading to his sacking and replacement by Harry Redknapp.

Stoke will confirm Hughes's appointment at a news conference at 11:00 BST with the club expected to announce he has signed a three-year deal.

Chairman Peter Coates told the Stoke Sentinel: "We had lots of inquiries about the job, including some very interesting names, but we decided Mark Hughes was a fit for us.

"His record speaks for itself. He has done excellently by anyone's standards. He's also a thoughtful, intelligent man with an intense desire to win."

Hughes enjoyed a stellar playing career with the likes of Manchester United, Barcelona and Chelsea before managing Wales, initially on a part-time basis before taking on a full-time position.

He began his club managerial career at Blackburn in 2004, leading Rovers to three successive top-10 finishes before leaving Ewood Park after four years to take charge at Manchester City in June 2008.

His spell at City lasted 18 months, during which time the club was taken over by the Abu Dhabi Group, before he was dismissed and replaced by Roberto Mancini in December 2009.

A one-season stint at Fulham in 2010-11 helped Hughes rebuild his reputation as he took the London club to eighth in the Premier League.

He resigned in June 2011 and started his ill-fated spell at QPR in January 2012.

The former Manchester United striker takes over a Stoke side built in the mould of the recently departed Pulis.

In his second stint at the club, 55-year-old Pulis won promotion to the Premier League in 2008 to end a 23-year spell without top-flight football.

Stoke were losing FA Cup finalists in 2011 when beaten by Manchester City, although they did qualify for the Europa League and reached the last 32 the following season where they lost to Valencia.

But his team's robust and direct style of play brought criticism from rival managers, such as Arsenal's Arsene Wenger, and latterly from his own supporters.

Hughes's appointment will not be universally popular with fans, according to the chairman of Stoke City's Supporters Club, Bryan Shaw.

"From all the people available, he would not have been my first choice, although he has a reasonable record apart from at QPR," he said.

"Not a lot of supporters wanted Tony Pulis back when he was brought back for a second spell in charge.

"That wasn't a popular decision because of his style of football. Probably half of the fan base was against him at first but he won the majority over. There is a feeling Hughes is similar.

"If you ask the majority of Stoke supporters, Mark Hughes would not be their first choice. That said, whoever the chairman appoints we have to get behind. We just have to hope he proves us wrong."

However, Stoke legend Denis Smith, who made almost 500 appearances for the Potters, believes that Hughes will be able to make a good impression.

"He's a fairly young manager, got new ideas, the technology he uses is good, and he's got good staff who are forward looking," the former defender told BBC Radio Stoke.

"His record is good except for QPR. If you look at what he did with Blackburn, Wales and Fulham his record is good. His last job was not so good, but everybody has a blip now and again.

"Mark will know what's expected of him, and if you look at the sides that he's put together they usually try an attacking way of playing.

"In the end he's got to win games. If you don't let any in, you're not going to get beat, so you start with your defence, but his defence is quite strong. What he's got to do is improve the attacking side of things."