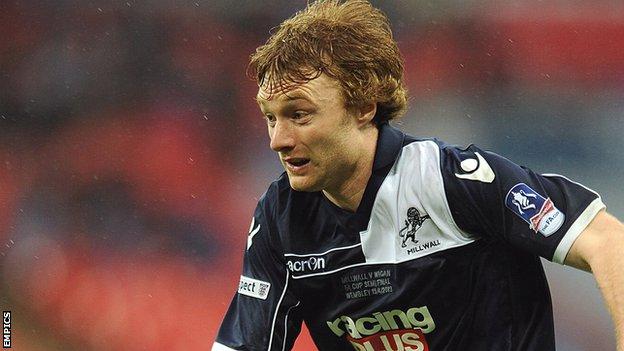 Notts County midfielder Judge, 24, returns to the club with which he began his career, on a three-year contract.

Eastwood has already completed his move, while Judge and Taylor will officially join Blackburn on 1 July.

All three players were out of contract with their previous clubs.

Judge, an attacking midfielder, left Rovers in January 2011 after only two appearances for the club and enjoyed a successful spell at Meadow Lane. He was named in the PFA's League One Team of the Year last season.

Taylor spent a year at The Den, scoring three times in 26 games for Millwall after joining from Oldham last summer, and played an important role in the Lions' run to the last four of the FA Cup.

Jordan Rhodes, who was signed for £8m from Huddersfield in August, scored 27 of Blackburn's 55 league goals during the 2012-13 season

Former Huddersfield and Oxford keeper Eastwood made 30 appearances for Pompey in 2012-13 but could not save them from relegation to League Two.

The three signings have been completed only four days after Bowyer was on a 12-month rolling contract, following

"It's great news for us that Alan Judge is returning," Bowyer told BBC Radio Lancashire.

"I know him from his time with the youth team and he epitomises what we want. He's hard-working, he's got bags of energy, he can contribute goals and create goals.

"If you look at where our goals came from last season, they all came from Jordan [Rhodes] and we needed more being contributed from different areas of the pitch.

"He [Judge] will do that, as will Chris Taylor. Chris was magnificent against us in the cup for Millwall. They can play in a number of positions, which is vital for us."

Meanwhile, managing director Derek Shaw has confirmed that on-loan striker Colin Kazim-Richards will not be returning to Ewood Park next season, and that the club are in talks with experienced midfielder David Dunn over a new deal.

"We're in discussions with David's representatives to try to resolve something with David, but Colin's gone back [to Galatasaray]," said Shaw.

"Colin did fine for us, but he's highly paid. He's on Premier League money and we've got to trim the budget."